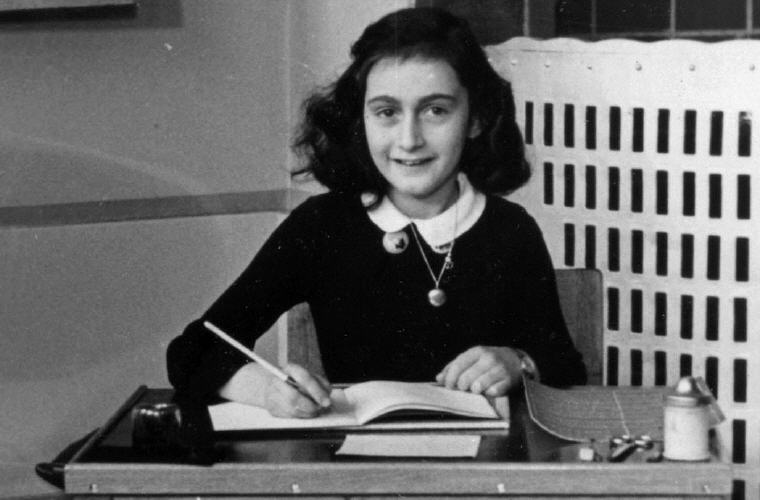 1. It’s really a wonder that I haven’t dropped all my ideals, because they seem so absurd and impossible to carry out. Yet I keep them, because in spite of everything, I still believe that people are really good at heart.

2. I don’t have much in the way of money or worldly possessions, I’m not beautiful, intelligent or clever, but I’m happy, and I intend to stay that way! I was born happy, I love people, I have a trusting nature, and I’d like everyone else to be happy too.

3. I know what I want, I have a goal, I have opinions, a religion and love. If only I can be myself, I’ll be satisfied. I know that I’m a woman, a woman with inner strength and a great deal of courage!

4. I love you, with a love so great that it simply couldn’t keep growing inside my heart, but had to leap out and reveal itself in all its magnitude.

5. Love, what is love? I don’t think you can really put it into words. Love is understanding someone, caring for him, sharing his joys and sorrows. This eventually includes physical love. You’ve shared something, given something away and received something in return, whether or not you’re married, whether or not you have a baby. Losing your virtue doesn’t matter, as long as you know that for as long as you live you’ll have someone at your side who understands you, and who doesn’t have to be shared with anyone else!

6. You can be lonely even when you’re loved by many people, since you’re still not anybody’s ‘one and only’.

Excerpt from Wikipedia: Annelies “Anne” Marie Frank (12 June 1929 – early March 1945) was one of the most discussed Jewish victims of the Holocaust. Her diary has been the basis for several plays and films. Born in the city of Frankfurt am Main in Weimar Germany, she lived most of her life in or near Amsterdam, in the Netherlands. Born a German national, Frank lost her citizenship in 1941 when Nazi Germany passed the anti-Semitic Nuremberg Laws. She gained international fame posthumously after her diary was published. It documents her experiences hiding during the German occupation of the Netherlands in World War II.
_________________

1. How noble and good everyone could be if, every evening before falling asleep, they were to recall to their minds the events of the whole day and consider exactly what has been good and bad. Then without realizing it, you try to improve yourself at the start of each new day.

2. At such moments I don’t think about all the misery, but about the beauty that still remains. This is where Mother and I differ greatly. Her advice in the face of melancholy is: “Think about all the suffering in the world and be thankful you’re not part of it.” My advice is: “Go outside, to the country, enjoy the sun and all nature has to offer. Go outside and try to recapture the happiness within yourself; think of all the beauty in yourself and in everything around you and be happy.”

3. Parents can only give good advice or put them on the right paths, but the final forming of a person’s character lies in their own hands.

4. How lovely to think that no one need wait a moment, we can start now, start slowly changing the world! How lovely that everyone, great and small, can make their contribution toward introducing justice straightaway. And you can always, always give something, even if it is only kindness.

5. I’ve found that there is always some beauty left — in nature, sunshine, freedom, in yourself; these can all help you. Look at these things, then you find yourself again, and God, and then you regain your balance. A person who’s happy will make others happy; a person who has courage and faith will never die in misery!

6. The best remedy for those who are frightened, lonely or unhappy is to go outside, somewhere they can be alone, alone with the sky, nature and God. For then and only then can you feel that everything is as it should be and that God wants people to be happy amid nature’s beauty and simplicity.

7. I don’t want to have lived in vain like most people. I want to be useful or bring enjoyment to all people, even those I’ve never met. I want to go on living even after my death!

8. People can tell you to keep your mouth shut, but it doesn’t stop you having your own opinions. Even if people are still very young, they shouldn’t be prevented from saying what they think.

9. We all live with the objective of being happy; our lives are all different and yet the same.

10. But where there’s hope, there’s life. It fills us with fresh courage and makes us strong again.

11. Human greatness does not lie in wealth or power, but in character and goodness. People are just people, and all people have faults and shortcomings, but all of us are born with a basic goodness.

12. Although I’m only fourteen, I know quite well what I want, I know who is right and who is wrong. I have my opinions, my own ideas and principles, and although it may sound pretty mad from an adolescent, I feel more of a person than a child, I feel quite independent of anyone.

13. I’ve learned one thing: you only really get to know a person after a fight. Only then can you judge their true character!

14. Earning happiness means doing good and working, not speculating and being lazy. Laziness may look inviting, but only work gives you true satisfaction.

15. He who has courage and faith will never perish in misery!

16. As long as this exists, this sunshine and this cloudless sky, and as long as I can enjoy it, how can I be sad?

17. It’s a wonder I haven’t abandoned all my ideals, they seem so absurd and impractical. Yet I cling to them because I still believe, in spite of everything, that people are truly good at heart.

18. Ever since I was a little girl and could barely talk, the word ‘why’ has lived and grown along with me. It’s a well-known fact that children ask questions about anything and everything, since almost everything is new to them. That is especially true of me, and not just as a child. Even when I was older, I couldn’t stop asking questions.

19. When I grew older, I noticed that not all questions can be asked and that many whys can never be answered. As a result, I tried to work things out for myself by mulling over my own questions. And I came to the important discovery that questions which you either can’t or shouldn’t ask in public, or questions which you can’t put into words, can easily be solved in your own head. So the word ‘why’ not only taught me to ask, but also to think.

20. Right through the ages there have been Jews, through all the ages they have had to suffer, but it has made them strong too; the weak fall, but the strong will remain and never go under!

21. Quite honestly, I can’t imagine how anyone can say: “I’m weak,” and then remain so. After all, if you know it, why not fight against it, why not try to train your character? The answer was: “Because it’s so much easier not to!” This reply rather discouraged me.

22. Riches can all be lost, but that happiness in your own heart can only be veiled, and it will still bring you happiness again, as long as you live.

1. Everyone has inside of him a piece of good news. The good news is that you don’t know how great you can be! How much you can love! What you can accomplish! And what your potential is!

2. No one has ever become poor by giving.

3. In the long run, the sharpest weapon of all is a kind and gentle spirit.

4. Look at how a single candle can both defy and define the darkness.