1. If you would be loved, love and be lovable.

2. He that falls in love with himself, will have no rivals.

3. I resolve to speak ill of no man whatever, not even in a matter of truth; but rather by some means excuse the faults I hear charged upon others, and upon proper occasions speak all the good I know of every body.

4. Keep your eyes wide open before marriage, half shut afterwards.

5. Marriage is the proper Remedy. It is the most natural State of Man, and therefore the State in which you are most likely to find solid Happiness.

Excerpt from Wikipedia: Benjamin Franklin (January 17, 1706 – April 17, 1790) was one of the Founding Fathers of the United States of America. A noted polymath, Franklin was a leading author and printer, satirist, political theorist, politician, scientist, inventor, civic activist, statesman, and diplomat. As a scientist, he was a major figure in the Enlightenment and the history of physics for his discoveries and theories regarding electricity. He invented the lightning rod, bifocals, the Franklin stove, a carriage odometer, and the glass ‘armonica’. He formed both the first public lending library in America and first fire department in Pennsylvania. He was an early proponent of colonial unity, and as a political writer and activist he supported the idea of an American nation. As a diplomat during the American Revolution he secured the French alliance that helped to make independence of the United States possible. 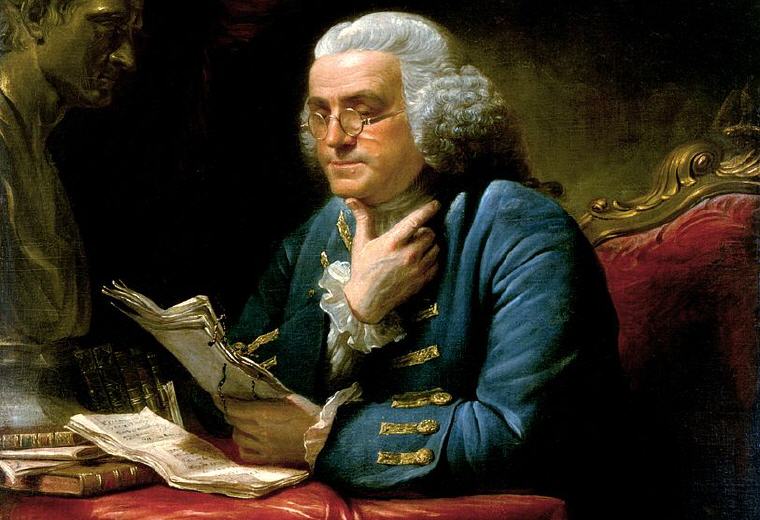 1. A slip of the foot you may soon recover, but a slip of the tongue you may never get over.

2. If a man empties his purse into his head no man can take it from him. An investment in knowledge pays the best interest.

3. Anger is never without Reason, but seldom with a good One.

4. Hide not your Talents, they for Use were made. What’s a Sun-Dial in the Shade!

7. There are three things extremely hard, Steel, a Diamond and to know one’s self.

8. He that can have Patience, can have what he will.

9. He that would live in peace and at ease,
Must not speak all he knows, nor judge all he sees.

14. If all printers were determined not to print anything till they were sure it would offend nobody, there would be very little printed.

16. How few there are who have courage enough to own their Faults, or resolution enough to mend them!

17. If you would have a faithful servant, and one that you like, serve yourself.

18. Let no Pleasure tempt thee, no Profit allure thee, no Ambition corrupt thee, no Example sway thee, no Persuasion move thee, to do any thing which thou knowest to be Evil; So shalt thou always jollily: for a good Conscience is a continual Christmas. Adieu.

19. A learned blockhead is a greater blockhead than an ignorant one. Being ignorant is not so much a shame as being unwilling to learn.

20. Search others for their virtues, thy self for thy vices.

21. Each year one vicious habit rooted out, in time might make the worst Man good throughout.

23. If you do what you should not, you must hear what you would not.

24. Wish not so much to live long as to live well.

27. You cannot pluck roses without fear of thorns, nor enjoy fair wife without danger of horns. [S]

29. Beware of little Expences, a small Leak will sink a great Ship.

30. If you wou’d not be forgotten as soon as you are dead and rotten, either write things worth reading, or do things worth the writing.

31. Experience keeps a dear school, yet fools will learn in no other.

32. Be at war with your vices, at peace with your neighbours, and let every new-year find you a better man.

33. A long life may not be good enough, but a good life is long enough.

34. Names of Virtues with their Precepts:

1. TEMPERANCE. Eat not to Dulness. Drink not to Elevation.
2. SILENCE. Speak not but what may benefit others or your self. Avoid trifling Conversation.
3. ORDER. Let all your Things have their Places. Let each part of your Business have its Time.
4. RESOLUTION. Resolve to perform what you ought. Perform without fail what you resolve.
5. FRUGALITY. Make no Expense but to do good to others or yourself; i.e. Waste nothing.
6. INDUSTRY. Lose no Time. Be always employ’d in something useful. Cut off all unnecessary actions.
7. SINCERITY. Use no hurtful Deceit. Think innocently and justly; and, if you speak, speak accordingly.
8. JUSTICE. Wrong none, by doing Injuries or omitting the Benefits that are your Duty.
9. MODERATION. Avoid Extremes. Forbear resenting Injuries so much as you think they deserve.
10. CLEANLINESS. Tolerate no Uncleanliness in Body, Clothes, or Habitation.
11. TRANQUILLITY. Be not disturbed at Trifles, or at Accidents common or unavoidable.
12. CHASTITY. Rarely use Venery but for Health or Offspring; Never to Dulness, Weakness, or the Injury of your own or another’s Peace or Reputation.
13. HUMILITY. Imitate Jesus and Socrates.

37. If you would know the value of money, go and try to borrow some: for he that goes a-borrowing goes a-sorrowing.

38. … it is a Grand Mistake to think of being Great without Goodness; and I pronounce it as certain, that there was never yet a truly Great Man that was not at the same Time truly Virtuous.

#39 Quoted in A Dictionary of American Proverbs

39. He that is of the opinion money will do everything may well be suspected of doing everything for money.

40. In general, mankind, since the improvement of cookery, eat about twice as much as nature requires.

41. ‘Tis easier to prevent bad habits than to break them.

42. Do not anticipate trouble, or worry about what may never happen. Keep in the sunlight.

43. Most People return small Favors, acknowledge middling ones, and repay great ones with Ingratitude.

44. Dost thou love life? Then do not squander time, for that is the stuff life is made of.

46. Early to bed and early to rise, makes a man healthy, wealthy and wise.

47. The Sun never repents of the good he does, nor does he ever demand a recompence.

48. I think the best way of doing good to the poor, is not making them easy in poverty, but leading or driving them out of it.

49. Love your enemies, for they tell you your faults.

50. Remember that time is money.

51. Our new Constitution is now established, and has an appearance that promises permanency; but in this world nothing can be said to be certain, except death and taxes!

52. Great Beauty, great strength, & great Riches, are really & truly of no great Use; a right Heart exceeds all.

53. To err is human, to repent divine, to persist devilish.

55. Virtue and Happiness are Mother and Daughter.

57. Never leave that till to-morrow which you can do to-day.

58. ‘Tis more noble to forgive, and more manly to despise, than to revenge an Injury.

59. He that has once done you a kindness will be more ready to do you another, than he whom you yourself have obliged.

#60 The Autobiography of Benjamin Franklin

60. But, on the whole, tho’ I never arrived at the perfection I had been so ambitious of obtaining, but fell far short of it, yet as I was, by the endeavor, a better and a happier man than I otherwise should have been if I had not attempted it…

1. I wake up every morning at nine and grab for the morning paper. Then I look at the obituary page. If my name is not on it, I get up.

2. He that displays too often his wife and his wallet is in danger of having both of them borrowed.

3. It is only when the rich are sick that they fully feel the impotence of wealth.

4. Do not fear mistakes. You will know failure. Continue to reach out.

6. Remember not only to say the right thing in the right place, but far more difficult still, to leave unsaid the wrong thing at the tempting moment.

8. If you would persuade, you must appeal to interest rather than intellect.

9. Educate your children to self-control, to the habit of holding passion and prejudice and evil tendencies subject to an upright and reasoning will, and you have done much to abolish misery from their future and crimes from society.

10. Be civil to all; sociable to many; familiar with few; friend to one; enemy to none.