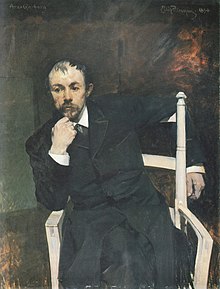 Garborg championed the use of Landsmål (now known as Nynorsk, or New Norwegian), as a literary language; he translated the Odyssey into it. He founded the weekly Fedraheim in 1877, in which he urged reforms in many spheres including political, social, religious, agrarian, and linguistic. He was married to Hulda Garborg.
_____________________________________

For money you can have everything it is said. No, that is not true. You can buy food, but not appetite; medicine, but not health; soft beds, but not sleep; knowledge but not intelligence; glitter, but not comfort; fun, but not pleasure; acquaintances, but not friendship; servants, but not faithfulness; grey hair, but not honor; quiet days, but not peace. The shell of all things you can get for money. But not the kernel. That cannot be had for money.