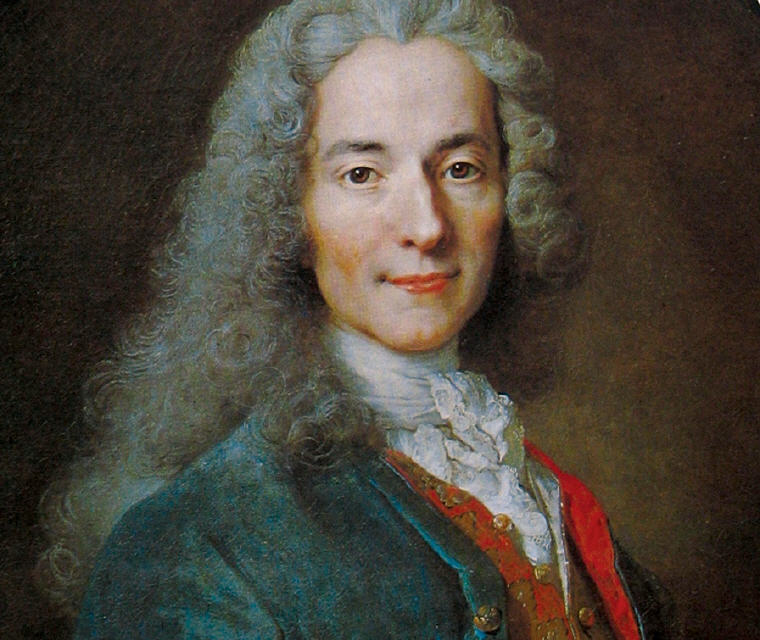 1. Love is a canvas furnished by Nature, and embroidered by imagination.

2. It is not love that should be depicted as blind, but self-love.

3. She blushed, and so did he. She greeted him in a faltering voice, and he spoke to her without knowing what he was saying.

Excerpt from Wikipedia: François-Marie Arouet (21 November 1694 – 30 May 1778), better known by the pen name Voltaire, was a French Enlightenment writer and philosopher famous for his wit and for his advocacy of civil liberties, including freedom of religion and free trade. Voltaire was a prolific writer and produced works in almost every literary form including plays, poetry, novels, essays, historical and scientific works, more than 20,000 letters and more than 2,000 books and pamphlets. He was an outspoken supporter of social reform, despite strict censorship laws and harsh penalties for those who broke them. As a satirical polemicist, he frequently made use of his works to criticize Catholic Church dogma and the French institutions of his day.
___________________

#1 A Dictionary of Quotations, in Most Frequent Use, David Evans Macdonnel, G. and J. Robinson, 1803

1. All men are equal; it is not birth, it is virtue alone that makes the difference.

3. It is true that, on having reflected for some years now that scarcely anything was to be gained by being so, I have begun to be somewhat merry because I have been told that that is good for one’s health.

4. …our labour preserves us from three great evils— weariness, vice, and want.

5. Chance is a word empty of sense; nothing can exist without a cause. The world is arranged according to mathematical laws; it is therefore arranged by an intelligence.

#6-8 The philosophical dictionary, 1802, London: Printed for Wynne and Scholey [S]

6. …there are mysteries which we believe through faith; and faith consists in believing what reason does not believe: which again is another miracle.

7. A peasant imagines that the hail which has fallen in his ground is purely matter of chance; but the philosopher knows that there is no such thing as chance; and that by the constitution of the world, it must necessarily have hailed that day, in that very place.

8. A Miracle, in the energetic sense of the word, means something wonderful; and thus every thing is a miracle. The order of nature, the rotation of a hundred millions of globes round a million. (Miracle)

9. It is dangerous to be right in matters where established men are wrong.

10. In the midst of all the doubts which we have discussed for four thousand years in four thousand ways, the safest course is to do nothing against one’s conscience. With this secret, we can enjoy life and have nothing to fear from death.

11. WHAT is toleration? It is a privilege to which human nature is entitled: we are all made up of weakness and errors, it therefore behoves us mutually to forgive another’s follies. This is the very first law of nature

#12 Taste, Section I, A philosophical dictionary, from the French by J.G. Gurton

12. To constitute taste, it is not sufficient to see and to know the beauty of a work. We must feel and be affected by it.

13. Prejudice is an opinion void of judgment: thus every where many opinions are instilled into children before they are able to judge.

14. Life is thickly sown with thorns. I know no other remedy than to pass rapidly over them. The longer we dwell on our misfortunes the greater is their power to harm us.

15. I now repeat this confession still more emphatically, since the more I read, the more I meditate, and the more I acquire, the more I am enabled to affirm that I know nothing.

16. …all men have an equal right to liberty, to the enjoyment of their own property, and to the protection of the laws.

1. It is forbidden to kill; therefore all murderers are punished unless they kill in large numbers and to the sound of trumpets.

2. Appreciation is a wonderful thing: It makes what is excellent in others belong to us as well.

3. Each player must accept the cards life deals him or her: but once they are in hand, he or she alone must decide how to play the cards in order to win the game.

4. Every man is guilty of all the good he did not do.

5. Judge a man by his questions rather than by his answers.

6. The ear is the avenue to the heart.