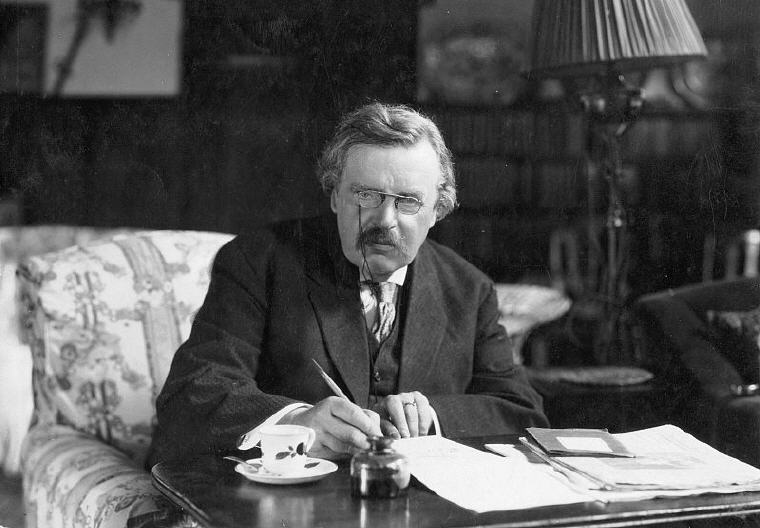 1. The Bible tells us to love our neighbors, and also to love our enemies; probably because they are generally the same people.

#3 The Advantages of Having One Leg, Tremendous Trifles, 1909

3. The way to love anything is to realise that it might be lost. In one of my feet I can feel how strong and splendid a foot is; in the other I can realise how very much otherwise it might have been.

4. Reason is always a kind of brute force; those who appeal to the head rather than the heart, however pallid and polite, are necessarily men of violence. We speak of ‘touching’ a man’s heart, but we can do nothing to his head but hit it.

5. A man imagines a happy marriage as a marriage of love; even if he makes fun of marriages that are without love, or feels sorry for lovers who are without marriage.

6. Marriage is a duel to the death which no man of honour should decline.

2. For in truth I believe that the only way to say anything definite is to define it, and all definition is by limitation and exclusion; and that the only way to say something distinct is to say something distinguishable; and distinguishable from everything else. In short, I think that a man does not know what he is saying until he knows what he is not saying.

#3 Orthodoxy, CHAPTER V: The Flag of the World

3. A man who says that no patriot should attack the Boer War until it is over is not worth answering intelligently; he is saying that no good son should warn his mother off a cliff until she has fallen over it.

6. Courage is almost a contradiction in terms. It means a strong desire to live taking the form of a readiness to die.

#7 A Miscellany of Men, The Contented Man

7. “Content” ought to mean in English, as it does in French, being pleased; placidly, perhaps, but still positively pleased. Being contented with bread and cheese ought not to mean not caring what you eat. It ought to mean caring for bread and cheese; handling and enjoying the cubic content of the bread and cheese and adding it to your own. Being content with an attic ought not to mean being unable to move from it and resigned to living in it. It ought to mean appreciating what there is to appreciate in such a position; such as the quaint and elvish slope of the ceiling or the sublime aerial view of the opposite chimney-pots. And in this sense contentment is a real and even an active virtue; it is not only affirmative, but creative.

#8 The Advantages of Having One Leg, Tremendous Trifles, 1909

8. This world and all our powers in it are far more awful and beautiful than even we know until some accident reminds us.

10. When giving treats to friends or children, give them what they like, emphatically not what is good for them.

#12 A Short History of England, Chapter VI: The Age of the Crusades

12. I would maintain that thanks are the highest form of thought; and that gratitude is happiness doubled by wonder.

#13 All Things Considered, THE ERROR OF IMPARTIALITY, Humanitarianism and Strength

13. For if you do not understand a man you cannot crush him. And if you do understand him, very probably you will not.

#14 The Scandal of Father Brown

#15 Autobiography, Chapter XI. The Shadow of the Sword

15. Man seems to be capable of great virtues but not small virtues; capable of defying his torturer but not of keeping his temper.

#16 Autobiography, Chapter XVI. The God with the Golden Key

18. What embitters the world is not excess of criticism, but an absence of self-criticism.

19. Without education, we are in a horrible and deadly danger of taking educated people seriously.

#20 Appreciations and Criticisms of the Works of Charles Dickens Chapter III “Pickwick Papers”, 1911

20. The whole difference between construction and creation is exactly this: that a thing constructed can only be loved after it is constructed; but a thing created is loved before it exists, as the mother can love the unborn child.

21. For children are innocent and love justice, while most of us are wicked and naturally prefer mercy.

22. I cannot understand the people who take literature seriously; but I can love them, and I do. Out of my love I warn them to keep clear of this book.

23. Fallacies do not cease to be fallacies because they become fashions.

24. Impartiality is a pompous name for indifference, which is an elegant name for ignorance.

#25 The Plan of This Book, Introduction, The Everlasting Man [S]

25. There are two ways of getting home; and one of them is to stay there. The other is to walk around the whole world till we come back to the same place; and I tried to trace such a journey in a story I once wrote.

2. When it comes to life the critical thing is whether you take things for granted or take them with gratitude.