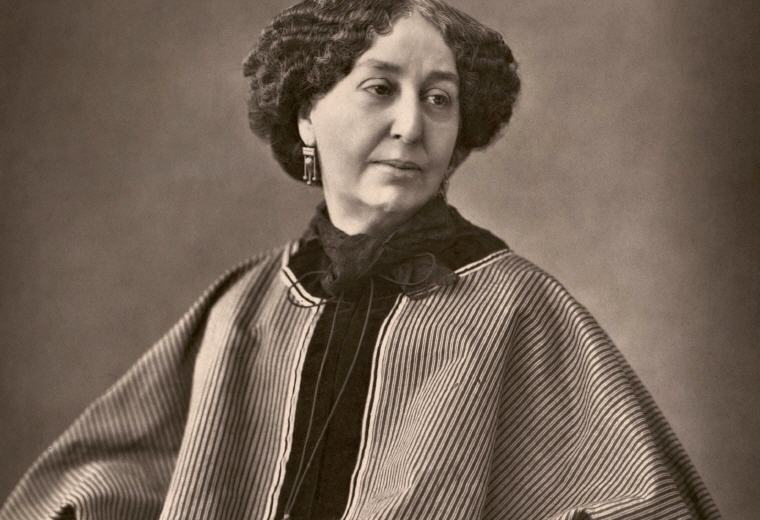 1. There is only one happiness in life, to love and be loved.

#2 Story of My Life: The Autobiography of George Sand, A Group Translation Edited by Thelma Jurgrau

2. Not only do I regard the lie in sensual love as a mortal sin—and I find that expression quite apt, because it implies that certain mistakes kill our very soul—but I regard as a mortal sin also the illusion that the senses come to some sort of fruition in such unfulfilled love. I say, and I believe, that one must love with one’s being, or live in complete chastity, no matter what the consequences.

#3 Jacques, George Sand, Some Aspects of Her Life and Writings, by Rene Doumic, Translated by Alys Hallard

3. No human creature can command love, and no one is to be blamed for feeling it or for ceasing to feel it. What lowers a woman is untruth.

#4 Lelia The Life Of George Sand, Translated from the French by GERARD HOPKINS

4. My heart once captured, I deliberately, and with a sort of frantic joy, showed reason the door. I accepted everything, I believed everything, without a struggle, without any consciousness of suffering, without regret, and without false shame. How could I blush for what I had learned to adore?

#5 A Thousand Flashes of French Wit, Wisdom, and Wickedness, 1886

5. Whoever has loved knows all that life contains of sorrow and of joy.

7. A day will come when everything in my life will be changed, when I shall do good to others, when some one will love me, when I shall give my whole heart to the man who give me his; meanwhile, I will suffer in silence and keep my love as a reward for him who shall set me free.

8. He said to himself, in a vague way, that love might have consoled him by taking him by surprise; for that is the only way in which love does console. One cannot find it when one seeks it; it comes to us when we do not expect it.

Excerpt from Wikipedia: Amantine (also “Amandine”) Aurore Lucile Dupin, later Baroness (French: baronne) Dudevant (1 July 1804 – 8 June 1876), best known by her pseudonym George Sand, was a French novelist. She is considered by some a feminist although she refused to join this movement. She is regarded as the first French female novelist to gain a major reputation.
_____________________

1. But that’s just like the stupid jealousy of the ordinary husband! They imagine everything and understand nothing.

#3 Indiana, Translated from the French by George W. Richards

3. You may impose silence upon me, but you can not prevent me from thinking.

4. No one makes a revolution by himself; and there are some revolutions, especially in the arts, which humanity accomplishes without quite knowing how, because it is everybody who takes them in hand.

5. One knows what one has lost, but not what one may find.

6. One never knows how much a family may grow; and when a hive is too full, and it is necessary to form a new swarm, each one thinks of carrying away his own honey.

7. Simplicity is the most difficult thing to secure in this world; it is the last limit of experience and the last effort of genius.

8. “But the beauty that addresses itself to the eyes,” she continued, “is only the spell of the moment; the eye of the body is not always that of the soul.”

9. Do you know what I prize above all things in this world? Kindness and simplicity. My ambition now is to become a good fellow; it is not easy thing and a very rare one.

10. One is happy as a result of one’s own efforts, once one knows of the necessary ingredients of happiness—simple tastes, a certain degree of courage, self-denial to a point, love of work, and, above all, a clear conscience.

#11 Indiana, Translated from the French by George W. Richards

11. You can bind my body, tie my hands, govern my actions: you are the strongest, and society adds to your power; but with my will, sir, you can do nothing.

12. If they are ignorant, they are despised, if learned, mocked. In love they are reduced to the status of courtesan. As wives they are treated more as servants than as companions. Men do not love them: they make use of them, they exploit them and expect, in that way, to make them subject to the law of fidelity.

13. Faith is an excitement and an enthusiasm: it is a condition of intellectual magnificence to which we must cling as to a treasure, and not squander on our way through life in the small coin of empty words, or in exact and priggish argument.

14. The world will know and understand me someday. But if that day does not arrive, it does not greatly matter. I shall have opened the way for other women.

16. The truth is too simple: one must always get there by a complicated route.

17. Experience is always a trustworthy guide; it may not tell you everything, but it never lies.

1. One changes from day to day, and… after a few years have passed one has completely altered.

2. Try to keep your soul young and quivering right up to old age, and to imagine right up to the brink of death that life is only beginning. I think that is the only way to keep adding to one’s talent, and one’s inner happiness.

3. Work is not man’s punishment. It is his reward and his strength and his pleasure.

4. Let us accept truth, even when it surprises us and alters our views.

5. The old woman I shall become will be quite different from the woman I am now. Another I is beginning.

6. It is a mistake to regard age as a downhill grade toward dissolution. The reverse is true. As one grows older, one climbs with surprising strides.