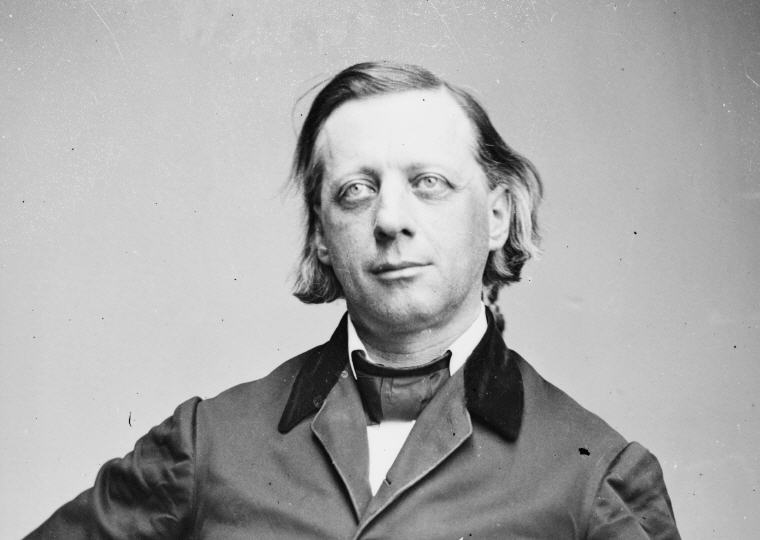 1. I never know how to worship until I know how to love; and to love I must have something I can put my arms around,–something that, touching my heart, shall leave not the chill of ice, but the warmth of summer.

2. One does not know how to love till he has felt the discipline of life.

3. Young love is a flame; very pretty, often very hot and fierce, but still only light and flickering. The love of the older and disciplined heart is as coals, deep-burning, unquenchable.

4. Of all earthly music, that which reaches the furthest into heaven is the beating of a loving heart.

5. I think we never know the love of the parent for the child till we become parents.

Excerpt from Wikipedia: Henry Ward Beecher (June 24, 1813 – March 8, 1887) was a prominent, Congregationalist clergyman, social reformer, abolitionist, and speaker in the mid to late 19th century. An 1875 adultery trial in which he was accused of having an affair with a married woman was one of the most notorious American trials of the 19th century. In 2007, The Most Famous Man in America: A Biography of Henry Ward Beecher by Debby Applegate won the Pulitzer Prize for Biography or Autobiography.
__________________

2. A man is a fool who sits looking backward for himself in the past. Ah! what shallow vain conceit there is in men! Forget the things that are behind. That is not where you live. Your roots are not there. They are in the present; and you should reach up into the other life.

3. Some subtle part of every man’s own spirit goes with his work, is incarnated in it, and gives to it that undiscoverable something which marks and discriminates one artist from another. And so, every artist dips his brush in his own soul, and paints his own nature into his pictures.

#4 July 12: Evening, Morning and Evening Exercises: Selected from the Published and Unpublished Writings of The Rev. Henry Ward Beecher, Harper, 1871

4. Children are the hands by which we take hold of heaven.

5. All men are tempted. There is no man that lives that can’t be broken down, provided it is the right temptation, put in the right spot.

6. Clothes and manners do not make the man; but, when he is made, they greatly improve his appearance.

7. Good-nature is worth more than knowledge, more than money, more than honor, to the persons who possess it, and certainly to everybody who dwells with them, in so far as mere happiness is concerned.

8. It is not the going out of port, but the coming in, that determines the success of a voyage.

9. Pride slays thanksgiving, but a humble mind is the soil out of which thanks naturally grow. A proud man is seldom a grateful man, for he never thinks he gets as much as he deserves.

10. The unthankful heart, like my finger in the sand, discovers no mercies; but let the thankful heart sweep through the day, and as the magnet finds the iron, so it will find in every hour some heavenly blessings…

11. But years will teach him that love is more just than justice; that compassion will cure more sins than condemnation; and that summer will do more, with silent warmth, to redeem the earth from barrenness, than winter can, with all the majesty of storms and the irresistible power of her icy hand.

12. Greatness lies not in being strong, but in the right using of strength; and strength is not used rightly when it only serves to carry a man above his fellows for his own solitary glory. He is greatest whose strength carries up the most hearts by the attraction of his own.

13. “I can forgive, but I cannot forget,” is only another way of saying, “I will not forgive.” A forgiveness ought to be like a cancelled note, torn in two and burned up, so that it never can be shown against one.

15. The real man is one who always finds excuses for others, but never excuses himself.

1. Love cannot endure indifference. It needs to be wanted. Like a lamp, it needs to be fed out of the oil of another’s heart, or its flame burns low.

3. Gratitude is the fairest blossom which springs from the soul.

4. A person without a sense of humor is like a wagon without springs. It’s jolted by every pebble on the road.

5. Children are unpredictable. You never know what inconsistency they are going to catch you in next.

6. Every charitable act is a stepping stone toward heaven.

8. Hold yourself responsible for a higher standard than anybody expects of you. Never excuse yourself.

10. It’s easier to go down a hill than up it but the view is much better at the top.

11. The art of being happy lies in the power of extracting happiness from common things.