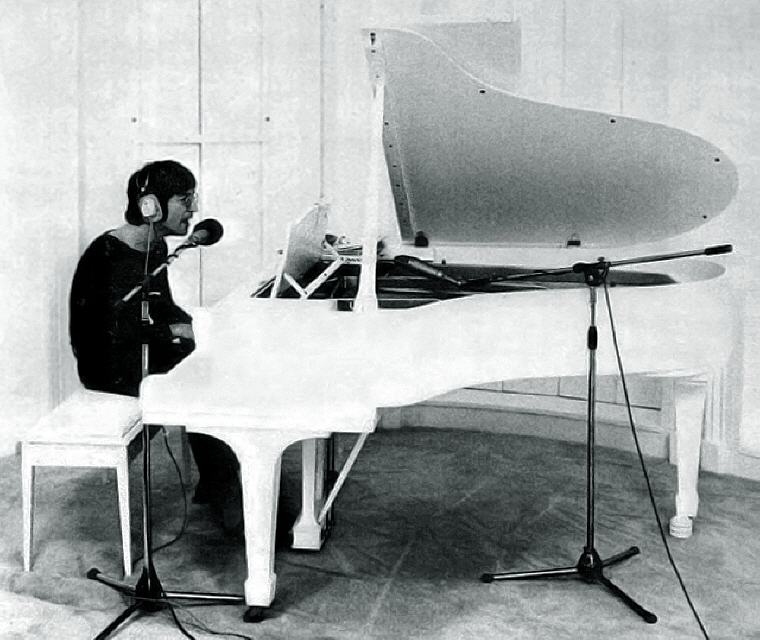 2. Love is having to say you’re sorry every five minutes.

3. Everything is clearer when you’re in love.

4. Love is the answer and you know that for sure
Love is a flower you got to let it grow

#5 When asked, “Why can’t you be alone without Yoko?”, John Lennon and Yoko Ono interviewed on the Beatles and Plastic Ono Band, Rolling Stone, 8 December 1970 [S1], [S2]

There is no reason on earth why I should be without her. There is nothing more important than our relationship, nothing. We dig being together all the time, and both of us could survive apart, but what for? I’m not going to sacrifice love, real love, for any fuckin’ whore, or any friend, or any business, because in the end, you’re alone at night. Neither of us want to be, and you can’t fill the bed with groupies. I don’t want to be a swinger. Like I said in the song, I’ve been through it all, and nothing works better than to have somebody you love hold you.

#6 In My Life, song by the Beatles written by John Lennon, credited to Lennon–McCartney, 1965

6. There are places I’ll remember
All my life though some have changed
Some forever not for better
Some have gone and some remain
All these places have their moments
With lovers and friends I still can recall
Some are dead and some are living
In my life I’ve loved them all

7. To work on this relationship with Yoko is very hard, and we’ve got the gift of love. But love is like a precious plant. You can’t just accept it and leave it in the cupboard, or just think it’s gonna get on with itself. You gotta keep watering it. You’ve got to really look after it, and be careful of it, and keep the flies off and see that it’s alright, and nurture it.

Excerpt from Wikipedia: John Winston Ono Lennon, (9 October 1940 – 8 December 1980) was an English rock musician, singer, songwriter, and peace activist who gained worldwide fame as one of the founding members of The Beatles. With Paul McCartney, Lennon formed one of the most influential and successful songwriting partnerships of the 20th century and “wrote some of the most popular music in rock and roll history”. He is ranked the second most successful songwriter in UK singles chart history after McCartney.
___________________

2. Violence begets violence, you know. And you can’t kill off all the violent people or all the murderers.

#3 “Do you take everything you do seriously?,” Interview at Apple offices in London on 8 May 1969 by David Wigg

5. There is a power which people tap and they use it for whatever ends they use it. Now God is a power which we’re all capable of tapping. We’re all lightbulbs that can tap the electricity. You can use electricity to kill people or to light the room, you know. And God is that. Neither one or the other but everything. And we use him to our best ability and it’s no good blaming God for war because you can use the H-bomb for cheap power throughout the world or you can use it for a bomb…

6. And I’m not afraid of dying. I don’t know how it’d feel at the moment. But I’m prepared for death because I don’t believe in it. I think it’s just getting out of one car and getting into another.

7. You’re left with yourself all the time, whatever you do—you know, meditation, drugs or anything. But you’ve got to get down to your own god and ‘your own temple in your head,’ like Donovan says. Etc. And it’s all down to yourself, you know.

#8 When asked, “What songs really stick in your mind as being Lennon-McCartney songs?”, John Lennon and Yoko Ono interviewed on the Beatles and Plastic Ono Band, Rolling Stone, 8 December 1970 [S1], [S2]

8. When it gets down to it, like she said, when you’re drowning you don’t say “I would be incredibly pleased if someone would have the foresight to notice me drowning and come and help me,” you just scream.

9. Before you cross the street take my hand
Life is what happens to you while you’re busy making other plans

Variant credited to Allen Saunders, 1957: “Life is what happens to us while we are making other plans.“ 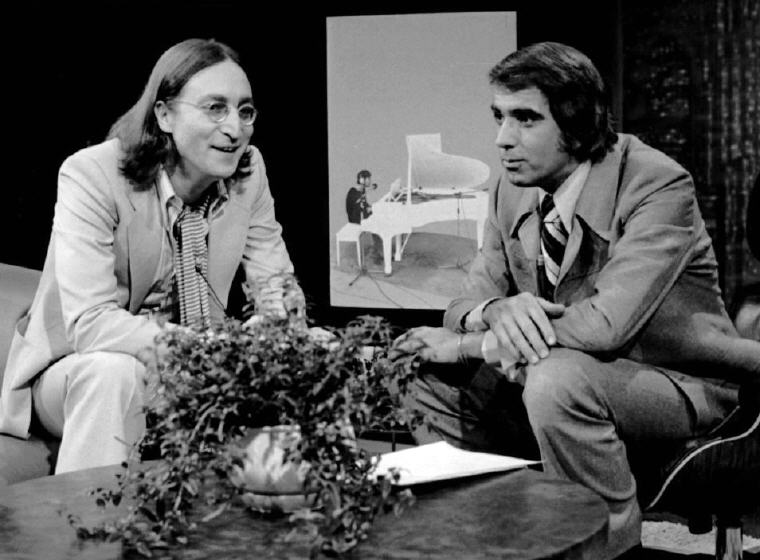 13. You know life can be long
And you got to be so strong
And the world is so tough
Sometimes I feel I’ve had enough

15. You can shine your shoes and wear a suit
you can comb your hair and look quite cute
you can hide your face behind a smile
one thing you can’t hide
is when you’re crippled inside

16. I believe in God, but not as one thing, not as an old man in the sky. I believe that what people call God is something in all of us, I believe what Jesus and Mohammed and Buddha and all the rest said was right. It’s just that the translations have gone wrong.

17. Produce your own dream. If you want to save Peru, go save Peru. It’s quite possible to do anything, but not to put it on the leaders and the parking meters. Don’t expect Jimmy Carter or Ronald Reagan or John Lennon or Yoko Ono or Bob Dylan or Jesus Christ to come and do it for you. You have to do it yourself.

18. You may say I’m a dreamer, but I’m not the only one
I hope someday you’ll join us and the world will live as one

#19 All We Are Saying: The Last Major Interview with John Lennon and Yoko Ono, By David Sheff, St. Martin’s Publishing Group, 24 September 2010

19. Also, rituals are important, no matter what we thought as kids. So nowadays it’s hip not to be married. But I’m not interested in being hip.

20. Now I am older
The more that I see the less that I know for sure
Now I am older ah hah
The future is brighter and now is the hour

21. You’re all geniuses and you’re all beautiful. You don’t need anybody to tell you who you are or what you are. You are what you are.

22. I suppose if I had said television was more popular than Jesus, I would have gotten away with it. I’m sorry I opened my mouth. I’m not anti-God, anti-Christ, or anti-religion. I wasn’t knocking it or putting it down. I was just saying it as a fact and it’s true more for England than here. I’m not saying that we’re better or greater, or comparing us with Jesus Christ as a person or God as a thing or whatever it is. I just said what I said and it was wrong. Or it was taken wrong. And now it’s all this.

2. There are two basic motivating forces: fear and love. When we are afraid, we pull back from life. When we are in love, we open to all that life has to offer with passion, excitement, and acceptance. We need to learn to love ourselves first, in all our glory and our imperfections. If we cannot love ourselves, we cannot fully open to our ability to love others or our potential to create. Evolution and all hopes for a better world rest in the fearlessness and open-hearted vision of people who embrace life.

3. When you do something noble and beautiful and nobody noticed, do not be sad. For the sun every morning is a beautiful spectacle and yet most of the audience still sleeps.

4. I’m not gonna change the way I look or the way I feel to conform to anything. I’ve always been a freak. So I’ve been a freak all my life and I have to live with that, you know. I’m one of those people.

5. As usual, there is a great woman behind every idiot.

6. I believe in everything until it’s disproved. So I believe in fairies, the myths, dragons. It all exists, even if it’s in your mind. Who’s to say that dreams and nightmares aren’t as real as the here and now?

1. Love is a promise
Love is a souvenir
Once given
Never forgotten, never let it disappear

2. It doesn’t matter who you love or how you love, but that you love.

3. When I was 5 years old, my mother always told me that happiness was the key to life. When I went to school, they asked me what I wanted to be when I grew up. I wrote down ‘happy’. They told me I didn’t understand the assignment, and I told them they didn’t understand life.

Excerpt from Goldie Hawn’s A Lotus Grows in the Mud: “Happiness was always important to me. Even at the young age of eleven, it was my biggest ambition. People would ask, “Goldie, what do you want to be when you grow up?”
“Happy,” I would reply, looking in their eyes.

#4 By Yoko Ono, Quoted in “All We Are Saying: The Last Major Interview with John Lennon and Yoko Ono,” by David Sheff

Full version credited to Dixie Willson: “Count your garden by the flowers, never by the leaves that fall;
Count your days by golden hours, don’t remember clouds at all!
Count your nights by stars—not shadows; count your life with smiles—not tears.
And with joy, on this your birthday—count your age by friends—not years.”