2. For it was not into my ear you whispered, but into my heart. It was not my lips you kissed, but my soul.

3. If I’m such a legend, then why am I so lonely? Let me tell you, legends are all very well if you’ve got somebody around who loves you. 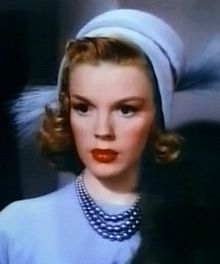 Excerpt from Wikipedia: Judy Garland (June 10, 1922 – June 22, 1969) was an American actress and singer. Through a career that spanned 45 of her 47 years, Garland attained international stardom as an actress in musical and dramatic roles, as a recording artist, and on the concert stage. Respected for her versatility, she received a Juvenile Academy Award, won a Golden Globe Award, received the Cecil B. DeMille Award for her work in films, as well as Grammy Awards and a Special Tony Award.
_____________________________________

2. Behind every cloud is another cloud.

3. How strange when an illusion dies. It’s as though you’ve lost a child.

4. I try to bring the audience’s own drama – tears and laughter they know about – to them.

5. I’ve always taken ‘The Wizard of Oz’ very seriously, you know. I believe in the idea of the rainbow. And I’ve spent my entire life trying to get over it.

7. There have been times when I have deliberately tried to take my life… I think I must have been crying for some attention.

8. You are never so alone as when you are ill on stage. The most nightmarish feeling in the world is suddenly to feel like throwing up in front of four thousand people.

9. We cast away priceless time in dreams, born of imagination, fed upon illusion, and put to death by reality.