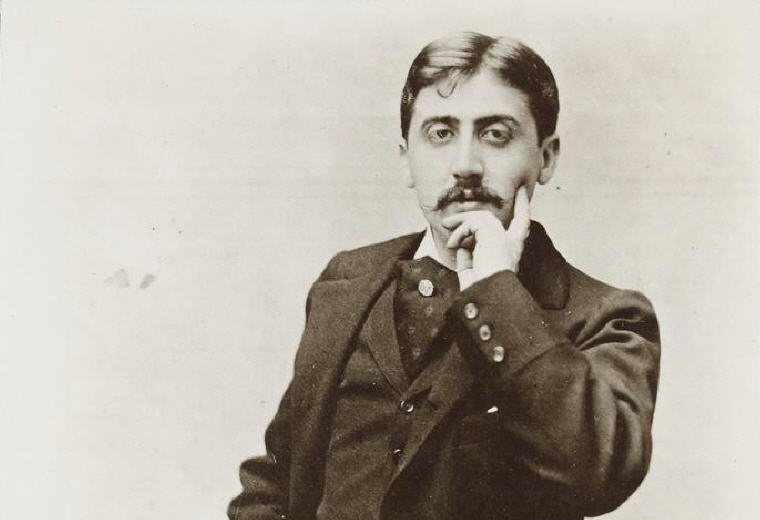 1. In a separation it is the one who is not really in love who says the more tender things.

2. What a profound significance small things assume when the woman we love conceals them from us.

3. In his younger days a man dreams of possessing the heart of the woman whom he loves; later, the feeling that he possesses the heart of a woman may be enough to make him fall in love with her.

4. People who are not in love fail to understand how an intelligent man can suffer because of a very ordinary woman. This is like being surprised that anyone should be stricken with cholera because of a creature so insignificant as the common bacillus.

#5 In Search Of Lost Time, Vol 6: Time Regained and A Guide to Proust

5. Love is a striking example of how little reality means to us.

6. Like everybody who is not in love, he imagined that one chose the person whom one loved after endless deliberations and on the strength of various qualities and advantages.

7. Love, what is it but space and time rendered perceptible by the heart.

#8 Swann’s Way, Remembrance Of Things Past, Volume One, Translated From The French By C. K. Scott Moncrieff, 1922 [S]

8. And then, gradually, the memory of her would dissolve and vanish, until I had forgotten the maiden of my dream.

Excerpt from Wikipedia: Valentin Louis Georges Eugène Marcel Proust (10 July 1871 – 18 November 1922) was a French novelist, critic and essayist best known for his monumental À la recherche du temps perdu (In Search of Lost Time; earlier translated as Remembrance of Things Past). It was published in seven parts between 1913 and 1927.
____________________

1. Knowing does not always allow us to prevent, but at least the things that we know, we hold them, if not in our hands, but at least in our thoughts where we may dispose of them at our whim, which gives us the illusion of power over them.

#2 Remembrance of Things Past, vol. II, Within a Budding Grove, Pléiade, 1954

2. We construct our life for one person and, when finally we are ready to receive that person in our life, she does not come, then dies in our eyes and we live as prisoners of that which was meant only for her.

#3 Within A Budding Grove, Remembrance of Things Past, Vol 1, Translated from the French by C.K. Scott Moncrieff

3. If a little dreaming is dangerous, the cure for it is not to dream less but to dream more, to dream all the time.

#4 Within a Budding Grove, Remembrance of Things Past

4. In theory one is aware that the earth revolves, but in practice one does not perceive it, the ground upon which one treads seems not to move, and one can live undisturbed. So it is with Time in one’s life.

5. Let us be grateful to people who make us happy, they are the charming gardeners who make our souls blossom.

#6-8 Within A Budding Grove, Remembrance of Things Past, Vol 1, Translated from the French by C.K. Scott Moncrieff

6. Like many intellectuals, he was incapable of saying a simple thing in a simple way.

7. The time which we have at our disposal every day is elastic; the passions that we feel expand it, those that we inspire contract it; and habit fills up what remains.

8. There is no man, however wise, who has not at some period of his youth said things, or lived in a way the consciousness of which is so unpleasant to him in later life that he would gladly, if he could, expunge it from his memory.

9. We are not provided with wisdom, we must discover it for ourselves, after a journey through the wilderness which no one else can take for us, an effort which no one can spare us.

#10 Swann’s Way, Remembrance of Things Past, Vol 1, Translated from the French by C.K. Scott Moncrieff

10. Always try to keep a patch of sky above your life, little boy,’ he added, turning to me. ‘You have a soul in you of rare quality, an artist’s nature; never let it starve for lack of what it needs.

12. Happiness is beneficial for the body but it is grief that develops the powers of the mind.

#13 Within a Budding Grove

13. It comes so soon, the moment when there is nothing left to wait for, when the body is fixed in an immobility which holds no fresh surprise in store, when one loses all hope on seeing — as on a tree in the height of summer one sees leaves already brown — round a face still young hair that is growing thin or turning gray; it is so short, that radiant morning time, that one comes to like only the very youngest girls, those in whom the flesh, like a precious leaven, is still at work.

15. Everything great in the world comes from neurotics. They alone have founded our religions and composed our masterpieces.

16. … for neither our greatest fears nor our greatest hopes are beyond the limits of our strength—we are able in the end both to dominate the first and to achieve the second.

17. We are healed of a suffering only by experiencing it to the full.

#18 The Princesse De Guermantes Receives, The Past Recaptured, Trans. Frederick A. Blossom, Remembrance of Things Past [S]

18. In reality, each reader reads only what is already within himself. The book is only a sort of optical instrument which the writer offers to the reader to enable the latter to discover in himself what he would not have found but for the aid of the book.
____________________

2. It was she whom I loved and whom I could not therefore see without that anxiety, without that desire for something more, which destroys in us, in the presence of the person we love, the sensation of loving.

3. As long as men are free to ask what they must, free to say what they think, free to think what they will, freedom can never be lost and science can never regress.

4. We must never be afraid to go too far, for truth lies beyond.

5. Time, which changes people, does not alter the image we have retained of them.