2. I am good, but not an angel. I do sin, but I am not the devil. I am just a small girl in a big world trying to find someone to love.

3. The real lover is the man who can thrill you by kissing your forehead or smiling into your eyes or just staring into space.

5. It’s better to be unhappy alone than unhappy with someone.

6. I’ve never fooled anyone. I’ve let people fool themselves. They didn’t bother to find out who and what I was. Instead they would invent a character for me. I wouldn’t argue with them. They were obviously loving somebody I wasn’t.

7. It’s often just enough to be with someone. I don’t need to touch them. Not even talk. A feeling passes between you both. You’re not alone.

8. I have feelings too. I am still human. All I want is to be loved, for myself and for my talent.

9. All a girl really wants is for one guy to prove to her that they are not all the same.

10. Love and work are the only two real things in our lives. They belong together, otherwise it is off. Work is in itself a form of love. 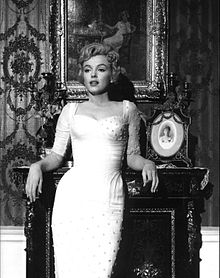 1. I’m selfish, impatient and a little insecure. I make mistakes, I am out of control and at times hard to handle. But if you can’t handle me at my worst, then you sure as hell don’t deserve me at my best.

2. A career is wonderful, but you can’t curl up with it on a cold night.

3. I believe that everything happens for a reason. People change so that you can learn to let go, things go wrong so that you appreciate them when they’re right, you believe lies so you eventually learn to trust no one but yourself, and sometimes good things fall apart so better things can fall together.

4. Imperfection is beauty, madness is genius and it’s better to be absolutely ridiculous than absolutely boring.

5. A sex symbol becomes a thing. I just hate to be a thing.

7. An actress is not a machine, but they treat you like a machine. A money machine.

8. If you’re gonna be two-faced at least make one of them pretty.

9. When it comes down to it, I let them think what they want. If they care enough to bother with what I do, then I’m already better than them.

10. Being a sex symbol is a heavy load to carry, especially when one is tired, hurt and bewildered.

11. Give a girl the right shoes, and she can conquer the world.

12. Beneath the makeup and behind the smile I am just a girl who wishes for the world.

14. She was a girl who knew how to be happy even when she was sad. And that’s important — you know.

16. Women who seek to be equal with men lack ambition.

18. We are all of us stars, and we deserve to twinkle

19. Fame will go by and, so long, I’ve had you, fame. If it goes by, I’ve always known it was fickle. So at least it’s something I experience, but that’s not where I live.

20. Hollywood is a place where they’ll pay you a thousand dollars for a kiss and fifty cents for your soul.

21. If I’d observed all the rules I’d never have got anywhere.

22. I want to grow old without facelifts. I want to have the courage to be loyal to the face I have made.

23. Success makes so many people hate you. I wish it wasn’t that way. It would be wonderful to enjoy success without seeing envy in the eyes of those around you.

24. Sex is part of nature. I go along with nature.

25. I don’t want to make money, I just want to be wonderful.

26. I don’t know who invented high heels, but all women owe him a lot!

27. You never know what life is like, until you have lived it.

28. Keep smiling, because life is a beautiful thing and there’s so much to smile about.

29. Diamonds are a girl’s best friend.

31. I knew I belonged to the public and to the world, not because I was talented or even beautiful, but because I had never belonged to anything or anyone else.

32. Wanting to be someone else is a waste of the person you are.

34. I live to suceed, not to please you or anyone else.

35. How wrong it is for a woman to expect the man to build the world she wants, rather than to create it herself.

36. Boys think girls are like books, If the cover doesn’t catch their eye they won’t bother to read what’s inside.

37. Just because you fail once doesn’t mean you’re gonna fail at everything.

39. When you have a good friend that really cares for you and tries to stick in there with you, you treat them like nothing. Learn to be a good friend because one day you’re gonna look up and say I lost a good friend. Learn how to be respectful to your friends, don’t just start arguments with them and don’t tell them the reason, always remember your friends will be there quicker than your family. Learn to remember you got great friends, don’t forget that and they will always care for you no matter what. Always remember to smile and look up at what you got in life.

40. To all the girls that think you’re fat because you’re not a size zero, you’re the beautiful one. Its society who’s ugly.

41. We should all start to live before we get too old. Fear is stupid. So are regrets.

42. I don’t forgive people because I’m weak, I forgive them because I am strong enough to know people make mistakes.