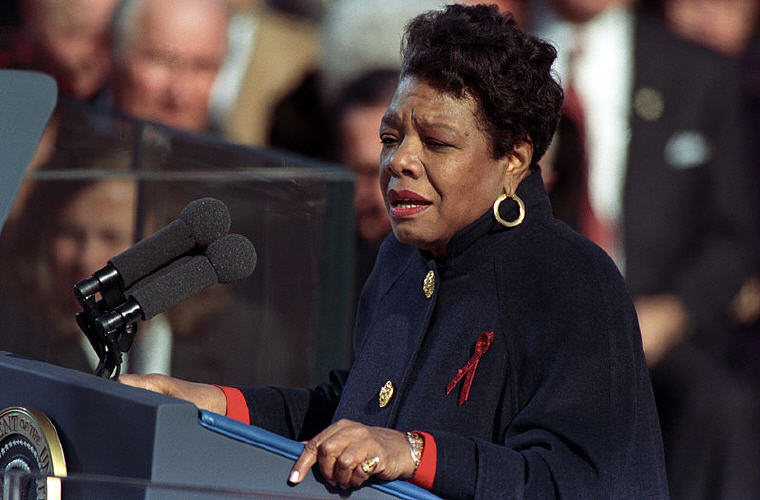 1. If we lose love and self respect for each other, this is how we finally die.

2. Love recognizes no barriers. It jumps hurdles, leaps fences, penetrates walls to arrive at its destination full of hope.

3. I do not trust people who don’t love themselves and yet tell me, ‘I love you.’ There is an African saying which is: Be careful when a naked person offers you a shirt.

4. If I am not good to myself, how can I expect anyone else to be good to me?

#5 Touched By An Angel

5. In the flush of love’s light
we dare be brave
And suddenly we see
that love costs all we are
and will ever be.
Yet it is only love
which sets us free.

6. But you can’t forgive without loving. And I don’t mean sentimentality. I don’t mean mush. I mean having enough courage to stand up and say, “I forgive. I’m finished with it.”

Excerpt from Wikipedia: Maya Angelou (born Marguerite Ann Johnson; April 4, 1928 – May 28, 2014) is an American author and poet. She has published six autobiographies, five books of essays, several books of poetry, and is credited with a list of plays, movies, and television shows spanning more than fifty years. She has received dozens of awards and over thirty honorary doctoral degrees. Angelou is best known for her series of autobiographies, which focus on her childhood and early adult experiences. The first, I Know Why the Caged Bird Sings (1969), tells of her life up to the age of seventeen, and brought her international recognition and acclaim.
_________________

1. Just do right…Right may not be expedient, it may not be profitable, but it will satisfy your soul. It brings you the kind of protection that bodyguards can’t give you.

2. Pick up the battle and make it a better world just where you are. It can be better and it must be better, but it’s up to us.

4. When someone shows you who they are, believe them the first time.

6. I can be changed by what happens to me, but I refuse to be reduced by it.

7. You may not control all the events that happen to you, but you can decide not to be reduced by them.

8. Be a rainbow in someone else’s cloud.

9. I love to see a young girl go out and grab the world by the lapels. Life’s a bitch. You’ve got to go out and kick ass.

10. We may encounter many defeats but we must not be defeated.

11. My mission in life is not merely to survive, but to thrive; and to do so with some passion, some compassion, some humor, and some style.

12. Ask for what you want and be prepared to get it!

13. We delight in the beauty of the butterfly, but rarely admit the changes it has gone through to achieve that beauty.

14. You alone are enough. You have nothing to prove to anybody.

15. No sun outlasts its sunset but will rise again and bring the dawn.

18. The ache for home lives in all of us, the safe place where we can go as we are and not be questioned.

20. Stepping onto a brand-new path is difficult, but not more difficult than remaining in a situation, which is not nurturing to the whole woman.

22. You may encounter many defeats, but you must not be defeated. In fact, it may be necessary to encounter the defeats, so that you can know who you are, what you can rise from, how you can still come out of it.

23. Life is pure adventure, and the sooner we realize that, the quicker we will be able to treat life as art.

25. I don’t know if I continue, even today, always liking myself. But what I learned to do many years ago was to forgive myself. It is very important for every human being to forgive herself or himself because if you live, you will make mistakes – it is inevitable. But once you do and you see the mistake, then you forgive yourself and say, ‘Well, if I’d known better I’d have done better,’ that’s all. So you say to people who you think you may have injured, ‘I’m sorry,’ and then you say to yourself, ‘I’m sorry.’ If we all hold on to the mistake, we can’t see our own glory in the mirror because we have the mistake between our faces and the mirror; we can’t see what we’re capable of being. You can ask forgiveness of others, but in the end the real forgiveness is in one’s own self. I think that young men and women are so caught by the way they see themselves. Now mind you. When a larger society sees them as unattractive, as threats, as too black or too white or too poor or too fat or too thin or too sexual or too asexual, that’s rough. But you can overcome that. The real difficulty is to overcome how you think about yourself. If we don’t have that we never grow, we never learn, and sure as hell we should never teach.

26. At fifteen life had taught me undeniably that surrender, in its place, was as honorable as resistance, especially if one had no choice.

#27 A Brave And Startling Truth

27. When we come to it
We must confess that we are the possible
We are the miraculous, the true wonder of this world
That is when, and only when
We come to it.

#28 I Know Why the Caged Bird Sings

28. Hoping for the best, prepared for the worst, and unsurprised by anything in between.

29. Hate, it has caused a lot of problems in the world, but has not solved one yet.

30. Nothing can dim the light which shines from within.

#31 Letter To My Daughter

31. I learned that a friend may be waiting behind a stranger’s face.

33. Let gratitude be the pillow upon which you kneel to say your nightly prayer. And let faith be the bridge you build to overcome evil and welcome good.

34. There is nothing so pitiful as a young cynic because he has gone from knowing nothing to believing nothing.

36. Nothing will work unless you do.

38. Success is loving life and daring to live it!

#39 Wouldn’t Take Nothing for My Journey Now

39. … and I realize that living well is an art which can be developed. Of course, you will need the basic talents to build upon: They are a love of life and ability to take great pleasure from small offerings, an assurance that the world owes you nothing and that every gift is exactly that, a gift.

40. We spend precious hours fearing the inevitable. It would be wise to use that time adoring our families, cherishing our friends and living our lives.

41. Without courage we cannot practice any other virtue with consistency. We can’t be kind, true, merciful, generous, or honest.

42. We are more alike, my friends, than we are unalike.

43. My wish for you is joy. When you wish someone joy, you wish peace, love, prosperity, health, happiness … all the good things.

44. Each of us, famous or infamous, is a role model for somebody, and if we aren’t, we should behave as though we are—cheerful, kind, loving, courteous. Because you can be sure someone is watching and taking deliberate and diligent notes.

45. History, despite its wrenching pain, cannot be unlived, but if faced with courage, need not be lived again.

46. I have found that among its other benefits, giving liberates the soul of the giver.

#47 Celebrations: Rituals of Peace and Prayer

47. My wish for you is that you continue. Continue to be who and how you are, to astonish a mean world with your acts of kindness. Continue to allow humor to lighten the burden of your tender heart.

48. If you are always trying to be normal, you will never know how amazing you can be.

#49 An Interview with Maya Angelou by Alison Beard

49. I understood early that not everything I did was going to be a masterpiece, but I would try to do it the best I knew how. I’ve listened to an inner voice and had enough courage to try unknown things. And I think everything in its time.

50. Perhaps travel cannot prevent bigotry, but by demonstrating that all peoples cry, laugh, eat, worry, and die, it can introduce the idea that if we try and understand each other, we may even become friends.

51. It’s one of the greatest gifts you can give yourself, to forgive. Forgive everybody.

53. Words mean more than what is set down on paper. It takes the human voice to infuse them with the shades of deeper meaning.

54. …you only are free when you realize you belong no place — you belong every place — no place at all. The price is high. The reward is great.

55. If you’re not angry, you’re either a stone, or you’re too sick to be angry. You should be angry. Now mind you, there’s a difference. You must not be bitter. Now let me show you why. Bitterness is like cancer. It eats upon the host. It doesn’t do anything to the object of its displeasure. So use that anger, yes. You write it. You paint it. You dance it. You march it. You vote it. You do everything about it. You talk it. Never stop talking it.

56. If you don’t like something, change it. If you can’t change it, change your attitude.

58. No matter how dull and seemingly unpromising life is right now, it’s going to change. It’s going to be better. But you have to keep working.

59. This is a wonderful day, I have never seen this one before.

1. My great hope is to laugh as much as I cry; to get my work done and try to love somebody and have the courage to accept the love in return.

2. You can only become truly accomplished at something you love. Don’t make money your goal. Instead pursue the things you love doing and then do them so well that people can’t take their eyes off of you.

4. When we find someone who is brave, fun, intelligent, and loving, we have to thank the universe.

6. If I could give you one thought, it would be to lift someone up. Lift a stranger up – lift her up. I would ask you, mother and father, brother and sister, lovers, mother and daughter, father and son, lift someone. The very idea of lifting someone up will lift you, as well.

I’ve learned that no matter what happens, or how bad it seems today, life does go on, and it will be better tomorrow.

I’ve learned that you can tell a lot about a person by the way he/she handles these three things: a rainy day, lost luggage, and tangled Christmas tree lights.

I’ve learned that regardless of your relationship with your parents, you’ll miss them when they’re gone from your life.

I’ve learned that you shouldn’t go through life with a catcher’s mitt on both hands; you need to be able to throw something back.

I’ve learned that whenever I decide something with an open heart, I usually make the right decision.

I’ve learned that even when I have pains, I don’t have to be one.

I’ve learned that every day you should reach out and touch someone. People love a warm hug, or just a friendly pat on the back.

I’ve learned that I still have a lot to learn.