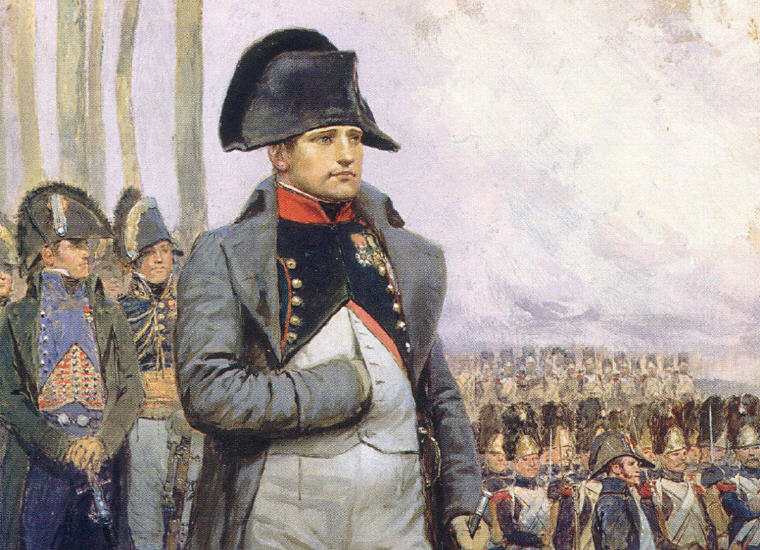 #1 Josephine: the Empress and her children, Nina Consuelo Epton, Weidenfeld and Nicolson, 1975

1. I must see her and press her to my heart. I love her to the point of madness, and I cannot continue to be separated from her. If she no longer loved me, I would have nothing left to do on earth.

3. I hope before long to press you in my arms and shall shower on you a million burning kisses as under the Equator.

4. You cannot question my constant and tender friendship, and you would know very imperfectly all the affection I have for you if you imagined that I can be happy if you are unhappy, and contented if you are ill at ease.

5. My waking thoughts are all of thee. Your portrait and the remembrance of last night’s delirium have robbed my senses of repose. Sweet and incomparable Josephine, what an extraordinary influence you have over my heart. Are you vexed? do I see you sad? are you ill at ease? My soul is broken with grief, and there is no rest for your lover.

#6-12 Napoleon in his own words, edited by Jules Bertaut, Translated by Herbert Edward Law and Charles Lincoln Rhodes, 1916

6. I do not believe it is in our nature to love impartially. We deceive ourselves when we think we can love two beings, even our own children, equally. There is always a dominant affection.

7. Love is the occupation of the idle, the distraction of the soldier, the danger of the monarch.

8. In love the only safety is in flight.

9. Family ties have always seemed to me sacred. I have never been able to believe that we can break them without dis- honor, and failing in that which is most sacred to man.

10. Marriage, to be happy, requires a constant exchange of confidence.

11. A man ought never to quarrel with a woman; he should hear her unreason in silence.

12. The life filled with love is the guarantee of a happy home. It assures the honor of the wife, and the respect of the husband. It maintains confidence and good relations.

Excerpt from Wikipedia: Napoleon Bonaparte (French: Napoléon Bonaparte French; 15 August 1769 – 5 May 1821) later known as Napoleon I, and previously Napoleone di Buonaparte, was a military and political leader of France whose actions shaped European politics in the early 19th century.
_________________

#1-8 Napoleon in his own words, edited by Jules Bertaut, Translated by Herbert Edward Law and Charles Lincoln Rhodes, 1916 [S]

1. Great men are meteors, who, by their burning, light the world.

2. Success is the most convincing talker in the world.

3. The fool has one great advantage over a man of sense — he is always satisfied with himself.

4. It is not true that men never change; they change for the worse, as well as for the better. It is not true they are ungrateful; more Often the benefactor rates his favors higher than their worth; and often too he does not allow for circumstances. If few men have the moral force to resist impulses, most men do carry within themselves the germs of virtues as well as of vices, of heroism as well as of cowardice. Such is human nature — education and circumstances do the rest.

5. A man with neither courage nor bravery is a mere thing.

6. Courage is like love; it must have hope for nourishment.

8. One can lead a nation only by helping it see a bright outlook. A leader is a dealer in hope.

#9-14 Napoleon in his own words, edited by Jules Bertaut, Translated by Herbert Edward Law and Charles Lincoln Rhodes, 1916

9. It is a mistake, too, to say that the face is the mirror of the soul. The truth is, men are very hard to know, and yet, not to be deceived, we must judge them by their present actions, but for the present only.

10. When a man is a favorite of Fortune she never takes him unawares, and, however astonishing her favors may be, she finds him ready.

11. It is only by prudence, wisdom, and dexterity, that great ends are attained and obstacles overcome. Without these qualities nothing succeeds.

12. Impatience is a great obstacle to success; he who treats everything with brusqueness gathers nothing, or only immature fruit which will never ripen.

13. There are only two forces that unite men — fear and interest. All great revolutions originate in fear, for the play of interests does not lead to accomplishment.

#15-22 Napoleon in his own words, edited by Jules Bertaut, Translated by Herbert Edward Law and Charles Lincoln Rhodes, 1916

15. Men have their virtues and their vices, their heroisms and their perversities; men are neither wholly good nor wholly bad, but possess and practice all that there is of good and bad here below. Such is the general rule. Temperament, education, the accidents of life, are modifying factors. Outside of this, everything is ordered arrangement, everything is chance. Such has been my rule of expectation and it has usually brought me success.

16. The shortcomings of children are often the result of the bad education they have received from their parents.

17. How many seemingly impossible things have been accomplished by resolute men because they had to do, or die.

18. Simpletons talk of the past, wise men of the present, and fools of the future.

19. Each hour wasted in youth is a hazard of misfortune taken for the future.

20. The superior man is undisturbed; praised or blamed, he goes on.

21. Adversity is the midwife of genius.

22. Nothing is more difficult than to decide.

#23-27 Napoleon in his own words, edited by Jules Bertaut, Translated by Herbert Edward Law and Charles Lincoln Rhodes, 1916

23. Time is a necessary element. When Archimedes offered to raise the world with a lever and fulcrum, he required time, God took seven days to create the universe.

24. In pardoning we rise above those who insult us.

25. One must learn to forgive and not to hold a hostile, bitter attitude of mind, which offends those about us and prevents us from enjoying ourselves; one must recognize human shortcomings and adjust himself to them rather than to be constantly finding fault with them.

27. The men who have changed the universe have never accomplished it by changing officials but always by inspiring the people.

28. The greater the man, the less is he opinionative, he depends upon events and circumstances.

29. He who fears being conquered is certain of defeat.

30. You write to me that it is impossible; the word is not French.

#31 Statement at the beginning of the 1813 campaign, quoted in The Mind of Napoleon, 1955 by J. Christopher Herold

31. If the art of war were nothing but the art of avoiding risks, glory would become the prey of mediocre minds…I have made all the calculations; fate will do the rest.

32. There is one kind of robber whom the law does not strike at, and who steals what is most precious to men, i.e., time.

#33 Letter to Minister of Foreign Affairs, Passariano, 26 September 1797, quoted in Napoleon as a General, 1902 by Maximilian Yorck von Wartenburg

33. All great events hang by a hair. The man of ability takes advantage of everything and neglects nothing that can give him a chance of success; whilst the less able man sometimes loses everything by neglecting a single one of those chances.

1. No one knows how it is that with one glance a boy can break through into a girl’s heart.

2. The extent of your consciousness is limited only by your ability to love and to embrace with your love the space around you, and all it contains.

3. As for me, to love you alone, to make you happy, to do nothing which would contradict your wishes, this is my destiny and the meaning of my life.

4. It requires more courage to suffer than to die.

5. There are but two powers in the world, the sword and the mind. In the long run the sword is always beaten by the mind.

6. Take time to deliberate, but when the time for action comes, stop thinking and go in.

7. Courage isn’t having the strength to go on – it is going on when you don’t have strength.

8. Never interrupt your enemy when he is making a mistake.