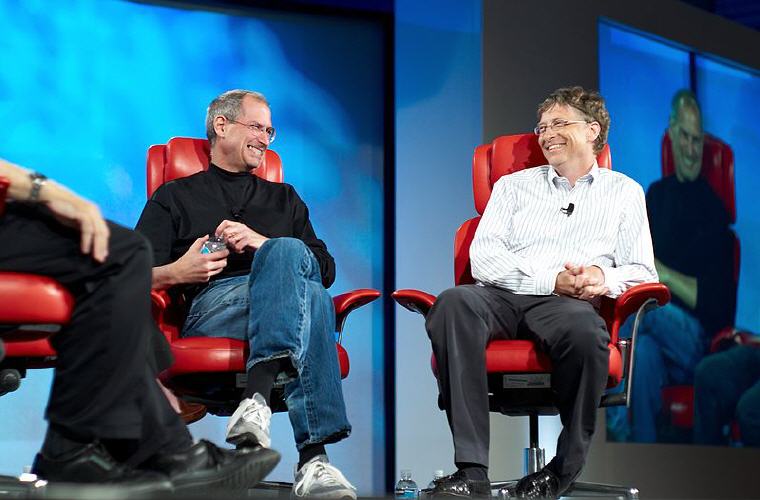 #1 Steve Jobs The Man Who Thought Different by Karen Blumenthal

1. I was in the parking lot, with the key in the car, and I thought to myself, If this is my last night on earth, would I rather spend it at a business meeting, or with this woman? I ran across the parking lot, asked her if she’d have dinner with me. She said yes, we walked into town and we’ve been together ever since.

2. It’s one of the things in life I really feel ashamed about. I was not very sensitive, and I hurt their feelings. I shouldn’t have. They had done so much to make sure I could go there, but I just didn’t want them around. I didn’t want anyone to know I had parents. I wanted to be like an orphan who had bummed around the country on trains and just arrived out of nowhere, with no roots, no connections, no background.

3. If you don’t love something, you’re not going to go the extra mile, work the extra weekend, challenge the status quo as much.

4. Every once in a while, I find myself in the presence of purity—purity of spirit and love—and I always cry. It always just reaches in and grabs me. That was one of those moments.

Excerpt from Wikipedia: Steven Paul “Steve” Jobs (February 24, 1955 – October 5, 2011) was an American entrepreneur. He is best known as the co-founder, chairman, and CEO of Apple Inc. Through Apple, he was widely recognized as a charismatic pioneer of the personal computer revolution and for his influential career in the computer and consumer electronics fields. Jobs also co-founded and served as chief executive of Pixar Animation Studios; he became a member of the board of directors of The Walt Disney Company in 2006, when Disney acquired Pixar.
______________________

#1 On the success of Bill Gates and Microsoft, as quoted in The Wall Street Journal, Summer 1993

1. Being the richest man in the cemetery doesn’t matter to me … Going to bed at night saying we’ve done something wonderful … that’s what matters to me.

2. My goal has always been not only to make great products, but to build great companies.

3. We can take full responsibility for the user experience. We can do things that the other guys can’t do.

4. My primary insight when we were screwed by Adobe in 1999 was that we shouldn’t get into any business where we didn’t control both the hardware and the software, otherwise we’d get our head handed to us.

5. You guys are making me feel funny now. I get to come to work every day and work with the most talented people on the planet, at Apple and Pixar. But these jobs are team sports. I accept your thanks on behalf of everybody at Apple.

7. Remembering that I’ll be dead soon is the most important tool I’ve ever encountered to help me make the big choices in life. Because almost everything — all external expectations, all pride, all fear of embarrassment or failure — these things just fall away in the face of death, leaving only what is truly important. Remembering that you are going to die is the best way I know to avoid the trap of thinking you have something to lose. You are already naked. There is no reason not to follow your heart.

#8 Inside Steve’s Brain: Business Lessons from Steve Jobs, the Man Who Saved Apple

8. I end up not buying a lot of things, because I find them ridiculous.

9. That’s why I think death is the most wonderful invention of life. It purges the system of these old models that are obsolete. I think that’s one of Apple’s challenges, really.

#10 Quoted in Insanely Simple: The Obsession That Drives Apple’s Success

10. People think focus means saying yes to the thing you’ve got to focus on. But that’s not what it means at all. It means saying no to the hundred other good ideas that there are. You have to pick carefully. I’m actually as proud of the things we haven’t done as the things we have done. Innovation is saying no to a thousand things. (1997 Apple Worldwide Developers Conference)

11. We’re trying to get back to the basics of great products, great marketing, and great distribution. Apple has drifted away from doing the basics really well.

14. We’re gambling on our vision, and we would rather do that than make “me too” products. Let some other companies do that. For us, it’s always the next dream.

15. We don’t get a chance to do that many things, and every one should be really excellent. Because this is our life. Life is brief, and then you die, you know? So this is what we’ve chosen to do with our life. We could be sitting in a monastery somewhere in Japan. We could be out sailing. Some of the [executive team] could be playing golf. They could be running other companies. And we’ve all chosen to do this with our lives. So it better be damn good. It better be worth it. And we think it is.

16. If it could save a person’s life, would you find a way to shave ten seconds off the boot time?

17. We have to let go of this notion that for Apple to win, Microsoft has to lose … I think if we want Microsoft Office on the Mac, we better treat the company that puts it out with a little bit of gratitude.

#18 Announcing the introduction of the iPhone, as quoted in Apple unveils cell phone, Apple TV, 9 January 2007

18. Every once in a while a revolutionary product comes along that changes everything. It’s very fortunate if you can work on just one of these in your career. … Apple’s been very fortunate in that it’s introduced a few of these.

#19 Quoted in Odyssey: Pepsi to Apple: A Journey of Adventure, Ideas, and the Future (1987) by John Sculley and John A. Byrne

19. Do you want to spend the rest of your life selling sugared water or do you want a chance to change the world?

22. I’m convinced that about half of what separates the successful entrepreneurs from the non-successful ones is pure perseverance. It is so hard. You put so much of your life into this thing. There are such rough moments in time that I think most people give up. I don’t blame them. Its really tough and it consumes your life.

23. Creativity is just connecting things. When you ask creative people how they did something, they feel a little guilty because they didn’t really do it, they just saw something. It seemed obvious to them after a while. That’s because they were able to connect experiences they’ve had and synthesize new things. And the reason they were able to do that was that they’ve had more experiences or they have thought more about their experiences than other people.

24. His values were much aligned with mine. He emphasized that you should never start a company with the goal of getting rich. Your goal should be making something you believe in and making a company that will last.

25. Apple at the core – its core value is that we believe that people with passion can change the world for the better.

#27-28 The interview Kara Swisher and Walt Mossberg conducted with Bill Gates and Steve Jobs at the D5 conference on May 30, 2007

28. Let’s go invent tomorrow rather than worrying about what happened yesterday.

29. The system is that there is no system. That doesn’t mean we don’t have process. Apple is a very disciplined company, and we have great processes. But that’s not what it’s about. Process makes you more efficient.

But innovation comes from people meeting up in the hallways or calling each other at 10:30 at night with a new idea, or because they realized something that shoots holes in how we’ve been thinking about a problem. It’s ad hoc meetings of six people called by someone who thinks he has figured out the coolest new thing ever and who wants to know what other people think of his idea.

#30 Interview with Inc. Magazine for its “The Entrepreneur of the Decade Award”, 1 April 1989

30. You can’t just ask customers what they want and then try to give that to them. By the time you get it built, they’ll want something new.

31. But in the end, for something this complicated, it’s really hard to design products by focus groups. A lot of times, people don’t know what they want until you show it to them.

32. Again, you can’t connect the dots looking forward; you can only connect them looking backwards. So you have to trust that the dots will somehow connect in your future. You have to trust in something — your gut, destiny, life, karma, whatever. Because believing that the dots will connect down the road will give you the confidence to follow your heart even when it leads you off the well-worn path and that will make all the difference.

33. Sometimes life hits you in the head with a brick. Don’t lose faith. I’m convinced that the only thing that kept me going was that I loved what I did. You’ve got to find what you love. And that is as true for your work as it is for your lovers. Your work is going to fill a large part of your life, and the only way to be truly satisfied is to do what you believe is great work. And the only way to do great work is to love what you do. If you haven’t found it yet, keep looking. Don’t settle. As with all matters of the heart, you’ll know when you find it. And, like any great relationship, it just gets better and better as the years roll on. So keep looking. Don’t settle.

34. Your time is limited, so don’t waste it living someone else’s life. Don’t be trapped by dogma — which is living with the results of other people’s thinking. Don’t let the noise of others’ opinions drown out your own inner voice. And most important, have the courage to follow your heart and intuition. They somehow already know what you truly want to become. Everything else is secondary.

35. We used to dream about this stuff. Now we get to build it. It’s pretty great. 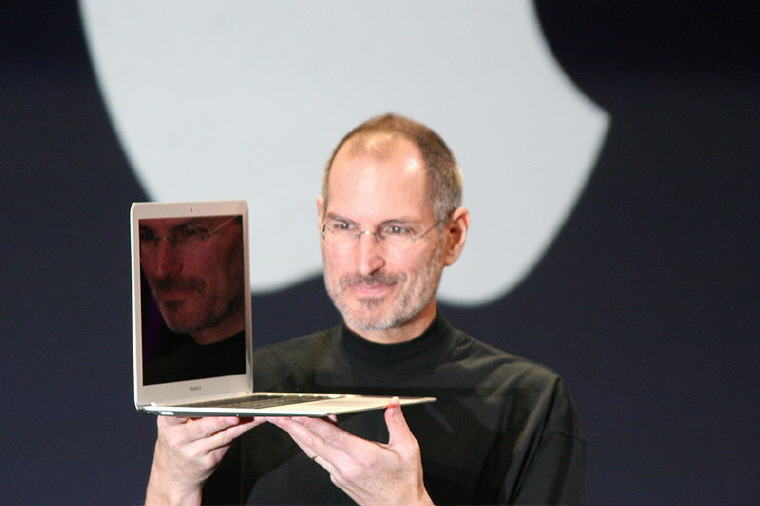 1. We’re here to put a dent in the universe. Otherwise why else even be here?