1. Terrible, it was terrible. Even today and it’s been several months now you just bring it up and I tear up a little bit, terribly. You know when you’re that close that long and got along as well as we did, we seldom had any serious arguments. We might have — might discuss which movie we wanted to see and what play we wanted to go to, where we ought to go for a vacation but that usually didn’t last very long because we were much of the same mind all the time. (Larry King interviewing Walter Cronkite) 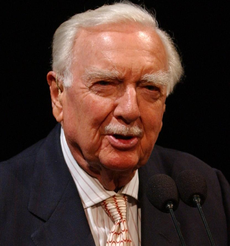 1. There is no such thing as a little freedom. Either you are all free, or you are not free.

2. Television is a high-impact medium. It does some things no other force can do-transmitting electronic pictures through the air. Still, as an explored, comprehensive medium, it is not a substitute for print.

3. In seeking truth you have to get both sides of a story.

4. Our job is only to hold up the mirror – to tell and show the public what has happened.

5. I think it is absolutely essential in a democracy to have competition in the media, a lot of competition, and we seem to be moving away from that.

6. I can’t imagine a person becoming a success who doesn’t give this game of life everything he’s got.

7. We are not educated well enough to perform the necessary act of intelligently selecting our leaders.

8. Whatever the cost of our libraries, the price is cheap compared to that of an ignorant nation.