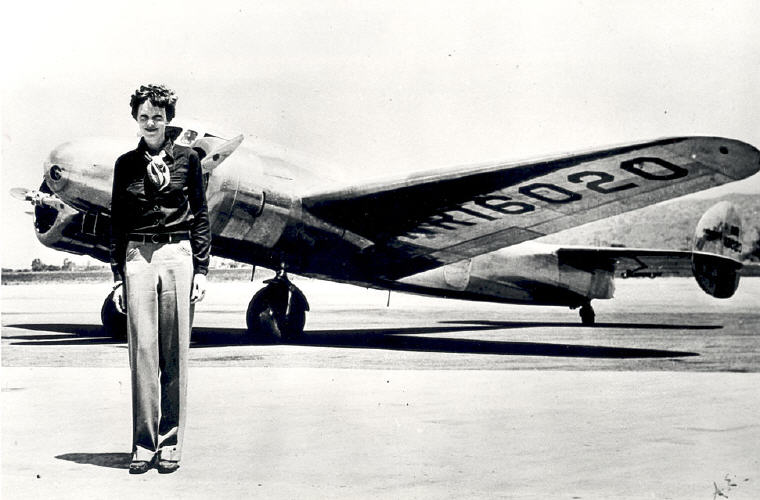 1. The more one does and sees and feels, the more one is able to do, and the more genuine may be one’s appreciation of fundamental things like home, and love and understanding companionship.

3. On our life together I want you to understand I shall not hold you to any midaevil code of faithfulness to me nor shall I consider myself bound to you similarly. If we can be honest I think the difficulties which arise may best be avoided should you or I become interested deeply (or in passing) in anyone else.

4. Please let us not interfere with the others’ work or play, nor let the world see our private joys or disagreements. In this connection I may have to keep some place where I can go to be myself, now and then, for I cannot guarantee to endure at all times the confinements of even an attractive cage.

Excerpt from Wikipedia: Amelia Mary Earhart (July 24, 1897 – disappeared 1937) was an American aviation pioneer and author. Earhart was the first aviatrix to fly solo across the Atlantic Ocean. She received the U.S. Distinguished Flying Cross for this record. She set many other records, wrote best-selling books about her flying experiences and was instrumental in the formation of The Ninety-Nines, an organization for female pilots.

During an attempt to make a circumnavigational flight of the globe in 1937 in a Purdue-funded Lockheed Model 10 Electra, Earhart disappeared over the central Pacific Ocean near Howland Island. Fascination with her life, career and disappearance continues to this day.
___________________

#1 Poem on Courage, Daughter of the Sky: The Story of Amelia Earhart, Paul L. Briand (Jr.) Duell, Sloan and Pearce, 1964

1. Courage is the price that Life exacts
for granting peace.
The soul that knows it not
Knows no release from little things:
Knows not the livid loneliness of fear,
Nor mountain heights where bitter
joy can hear
The sound of wings.
How can life grant us boon of living,
compensate
For dull gray ugliness and pregnant
hate
Unless we dare
The soul’s dominion? Each time we
make a choice, we pay
With courage to behold the resistless
day,
And count it fair.

2. I sometimes feel that adult human beings owe as much to themselves as to others, for by asserting individual rights, the baser natures of those who have them are held in check.

3. Given a little power over another, little natures swell to hideous proportions. It is hopeless to watch a character change of this kind in one you have cared for — a few rows might have been less suffering in the long run.

4. And if you should find that you are the first woman to feel an urge in that direction, what does it matter? Feel it and act on it just the same. It may turn out to be fun. And to me fun is the indispensable part of work.

#5 Letter to George P. Putnam, on the eve of her last flight, Last Flight

5. Please know that I am aware of the hazards. I want to do it because I want to do it. Women must try to do things as men have tried. When they fail, their failure must be a challenge to others.

6. I think of God as symbol for good—thinking good, identifying good in everybody and everything. This God I think of is not an abstraction, but a vitalizing, universal force, eternally present, and at all times available.

7. Then, too, there was my belief that now and then women should do for themselves what men have already done—occasionally what men have not done—thereby establishing themselves as persons, and perhaps encouraging other women toward greater independence of thought and action. Some such consideration was a contributing reason for my wanting to do what I so much wanted to do.

#8 Last Flight: The World’s Foremost Woman Aviator Recounts, in Her Own Words, Her Last, Fateful Flight

8. In my life I had come to realize that when things were going very well indeed it was just the time to anticipate trouble. And, conversely, I learned from pleasant experience that at the most despairing crisis, when all looked sour beyond words, some delightful “break” was apt to lurk just around the corner.

9. In soloing—as in other activities—it is far easier to start something than it is to finish it.

10. Experiment! Meet new people. That’s better than any college education. You will find the unexpected everywhere as you go through life. By adventuring about, you become accustomed to the unexpected. The unexpected then becomes what it really is—the inevitable.

13. The time to worry is three months before a flight. Decide then whether or not the goal is worth the risks involved. If it is, stop worrying….. To worry is to add another hazard. It retards reactions, makes one unfit.

14. No kind action ever stops with itself. One kind action leads to another. Good example is followed. A single act of kindness throws out roots in all directions, and the roots spring up and make new trees. The greatest work that kindness does to others is that it makes them kind themselves.

1. Being alone is scary, but not as scary as feeling alone in a relationship.

2. Never interrupt someone doing something you said couldn’t be done.

3. The stars seemed near enough to touch and never before have I seen so many. I always believed the lure of flying is the lure of beauty, but I was sure of it that night.

4. Everyone has ocean’s to fly, if they have the heart to do it. Is it reckless? Maybe. But what do dreams know of boundaries?

5. The most difficult thing is the decision to act, the rest is merely tenacity. The fears are paper tigers. You can do anything you decide to do. You can act to change and control your life; and the procedure, the process is its own reward.

6. Adventure is worthwhile in itself.

7. Some of us have great runways already built for us. If you have one, take off. But if you don’t have one, realize it is your responsibility to grab a shovel and build one for yourself and for those who will follow after you.

8. You haven’t seen a tree until you’ve seen its shadow from the sky.