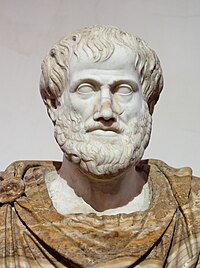 1. A true friend is one soul in two bodies.

2. All human actions have one or more of these seven causes: chance, nature, compulsions, habit, reason, passion, desire.

3. All men by nature desire knowledge.

4. Anybody can become angry – that is easy, but to be angry with the right person and to the right degree and at the right time and for the right purpose, and in the right way – that is not within everybody’s power and is not easy.

5. At his best, man is the noblest of all animals; separated from law and justice he is the worst.

6. Bring your desires down to your present means. Increase them only when your increased means permit.

7. Character may almost be called the most effective means of persuasion.

8. Courage is the first of human qualities because it is the quality which guarantees the others.

9. You will never do anything in this world without courage. It is the greatest quality of the mind next to honor.

10. Democracy is when the indigent, and not the men of property, are the rulers.

11. Different men seek after happiness in different ways and by different means, and so make for themselves different modes of life and forms of government.

12. Dignity does not consist in possessing honors, but in deserving them.

13. Even when laws have been written down, they ought not always to remain unaltered.

14. For though we love both the truth and our friends, piety requires us to honor the truth first.

15. Good habits formed at youth make all the difference.

16. Happiness depends upon ourselves.

19. I count him braver who overcomes his desires than him who conquers his enemies; for the hardest victory is over self.

20. If one way be better than another, that you may be sure is nature’s way.

21. It is just that we should be grateful, not only to those with whose views we may agree, but also to those who have expressed more superficial views; for these also contributed something, by developing before us the powers of thought.

22. It is the mark of an educated mind to be able to entertain a thought without accepting it.

23. Moral excellence comes about as a result of habit. We become just by doing just acts, temperate by doing temperate acts, brave by doing brave acts.

24. Personal beauty is a greater recommendation than any letter of reference.

25. The best friend is the man who in wishing me well wishes it for my sake.

26. The ideal man bears the accidents of life with dignity and grace, making the best of circumstances.

27. The least initial deviation from the truth is multiplied later a thousandfold.

29. Those who educate children well are more to be honored than they who produce them; for these only gave them life, those the art of living well.

30. We are what we repeatedly do. Excellence, then, is not an act, but a habit.

31. Mothers are fonder than fathers of their children because they are more certain they are their own.

32. Knowing yourself is the beginning of all wisdom.