1. One word frees us of all the weight and pain in life, that word is Love. 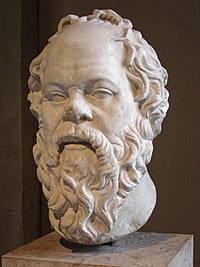 Excerpt from Wikipedia: Socrates (pronounced /ˈsɒkrətiːz/; Greek: Σωκράτης, Sōkrátēs; c. 469 BC–399 BC) was a Classical Greek philosopher. Credited as one of the founders of Western philosophy, he is an enigmatic figure known only through the classical accounts of his students. Plato’s dialogues are the most comprehensive accounts of Socrates to survive from antiquity.

Through his portrayal in Plato’s dialogues, Socrates has become renowned for his contribution to the field of ethics, and it is this Platonic Socrates who also lends his name to the concepts of Socratic irony and the Socratic method, or elenchus. The latter remains a commonly used tool in a wide range of discussions, and is a type of pedagogy in which a series of questions are asked not only to draw individual answers, but to encourage fundamental insight into the issue at hand. It is Plato’s Socrates that also made important and lasting contributions to the fields of epistemology and logic, and the influence of his ideas and approach remains strong in providing a foundation for much western philosophy that followed.

As one recent commentator has put it, Plato, the idealist, offers “an idol, a master figure, for philosophy. A Saint, a prophet of the ‘Sun-God’, a teacher condemned for his teachings as a heretic.” Yet, the ‘real’ Socrates, like many of the other Ancient philosophers, remains at best enigmatic and at worst unknown.

1. A system of morality which is based on relative emotional values is a mere illusion, a thoroughly vulgar conception which has nothing sound in it and nothing true.

4. Be slow to fall into friendship; but when thou art in, continue firm and constant.

5. False words are not only evil in themselves, but they infect the soul with evil.

6. He is a man of courage who does not run away, but remains at his post and fights against the enemy.

7. I am the wisest man alive, for I know one thing, and that is that I know nothing.

8. If a man is proud of his wealth, he should not be praised until it is known how he employs it.

9. It is not living that matters, but living rightly.

10. Let him that would move the world first move himself.

11. One who is injured ought not to return the injury, for on no account can it be right to do an injustice; and it is not right to return an injury, or to do evil to any man, however much we have suffered from him.

12. True wisdom comes to each of us when we realize how little we understand about life, ourselves, and the world around us.

16. The right way to begin is to pay attention to the young, and make them just as good as possible.

17. The only true wisdom is in knowing you know nothing.

18. I cannot teach anybody anything. I can only make them think.

19. To find yourself, think for yourself.

20. Be kind, for everyone you meet is fighting a hard battle.

22. Education is the kindling of a flame, not the filling of a vessel.

23. Let him who would move the world first move himself.

24. Do not do to others what angers you if done to you by others.

25. We cannot live better than in seeking to become better.

26. When the debate is lost, slander becomes the tool of the loser.

27. Employ your time in improving yourself by other men’s writings so that you shall come easily by what others have labored hard for.

29. Be nicer than necessary to everyone you meet. Everyone is fighting some kind of battle.

30. The greatest way to live with honor in this world is to be what we pretend to be.

31. One should never do wrong in return, nor mistreat any man, no matter how one has been mistreated by him.

32. The highest realms of thought are impossible to reach without first attaining an understanding of compassion.