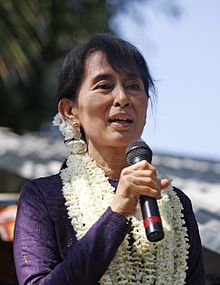 1. In societies where men are truly confident of their own worth, women are not merely tolerated but valued.

3. Within a system which denies the existence of basic human rights, fear tends to be the order of the day. Fear of imprisonment, fear of torture, fear of death, fear of losing friends, family, property or means of livelihood, fear of poverty, fear of isolation, fear of failure. A most insidious form of fear is that which masquerades as common sense or even wisdom, condemning as foolish, reckless, insignificant or futile the small, daily acts of courage which help to preserve man’s self-respect and inherent human dignity. It is not easy for a people conditioned by fear under the iron rule of the principle that might is right to free themselves from the enervating miasma of fear. Yet even under the most crushing state machinery courage rises up again and again, for fear is not the natural state of civilized man.

4. If you’re feeling helpless, help someone.

6. You should never let your fears prevent you from doing what you know is right.

7. Government leaders are amazing. So often it seems they are the last to know what the people want.

8. We will surely get to our destination if we join hands.

9. I don’t believe in people just hoping. We work for what we want. I always say that one has no right to hope without endeavor, so we work to try and bring about the situation that is necessary for the country, and we are confident that we will get to the negotiation table at one time or another.

#10 Freedom from Fear and Other Writings

10. To live the full life, one must have the courage to bear the responsibility of the needs of others.

11. Saints, it has been said, are the sinners who go on trying. So free men and women are the oppressed who go on trying and who in the process make themselves fit to bear the responsibilities and uphold the disciplines which will maintain a free society.

12. The education and empowerment of women throughout the world cannot fail to result in a more caring, tolerant, just and peaceful life for all.

14. My attitude to peace is rather based on the Burmese definition of peace – it really means removing all the negative factors that destroy peace in this world. So peace does not mean just putting an end to violence or to war, but to all other factors that threaten peace, such as discrimination, such as inequality, poverty.

15. By helping others, you will learn how to help yourselves.

16. I am prepared to talk with anyone. I have no personal grudge toward anybody.

17. I felt that it was my duty not to senselessly waste my time. And since I didn’t want to waste my time, I tried to accomplish as much as possible.

18. I think sometimes if you are alone, you are freer because your time is your own.

20. Since we live in this world, we have to do our best for this world.

21. When you decide to follow a certain path, you should follow it to the end and not be diverted from it for personal reasons.

22. My top priority is for people to understand that they have the power to change things themselves.

23. Since we live in this world we have a duty to do our best for the world.