1. Clarity of mind means clarity of passion, too; this is why a great and clear mind loves ardently and sees distinctly what it loves.

2. The heart has its reasons of which reason knows nothing. 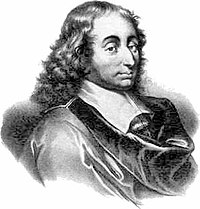 Excerpt from Wikipedia: Blaise Pascal (French pronunciation: [blɛz paskal]), (June 19, 1623, in Clermont-Ferrand, France – August 19, 1662, in Paris) was a French mathematician, physicist, and religious philosopher. He was a child prodigy who was educated by his father, a civil servant. Pascal’s earliest work was in the natural and applied sciences where he made important contributions to the construction of mechanical calculators, the study of fluids, and clarified the concepts of pressure and vacuum by generalizing the work of Evangelista Torricelli. Pascal also wrote in defense of the scientific method.
_____________________________________

1. All human evil comes from a single cause, man’s inability to sit still in a room.

4. Justice and power must be brought together, so that whatever is just may be powerful, and whatever is powerful may be just.

5. Kind words do not cost much. Yet they accomplish much.

6. Noble deeds that are concealed are most esteemed.

7. People are generally better persuaded by the reasons which they have themselves discovered than by those which have come in to the mind of others.

8. The strength of a man’s virtue should not be measured by his special exertions, but by his habitual acts.