1. I went to the school and put it to William, particularly, that if you find someone you love in life, you must hang onto it, and look after it, and if you were lucky enough to find someone who loved you, then you must protect it.

2. I think the biggest disease this world suffers from in this day and age is the disease of people feeling unloved, and I know that I can give love for a minute, for half an hour, for a day, for a month, but I can give – I’m very happy to do that and I want to do that. (BBC1 Panorama interview, 1995)

3. Family is the most important thing in the world.

4. I don’t want expensive gifts; I don’t want to be bought. I have everything I want. I just want someone to be there for me, to make me feel safe and secure.

5. I’m aware that people I have loved and have died and are in the spirit world looking after me. 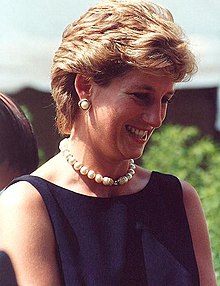 Excerpt from Wikipedia: Diana, Princess of Wales (Diana Frances Spencer; 1 July 1961 – 31 August 1997), was the first wife of Charles, Prince of Wales, whom she married on 29 July 1981, and member of the British Royal Family. She was also well known for her fund-raising work for international charities, and an eminent celebrity of the late 20th century. Her wedding to Charles, heir to the British throne and those of the then 18 Commonwealth realms, was held at St Paul’s Cathedral and seen by a global television audience of over 750 million. While married she bore the courtesy titles Princess of Wales, Duchess of Cornwall, Duchess of Rothesay, Countess of Chester and Baroness of Renfrew. The marriage produced two sons, the princes William and Harry, currently second and third in line to the throne, respectively.
_____________________________________

1. Carry out a random act of kindness, with no expectation of reward, safe in the knowledge that one day someone might do the same for you.

2. They say it is better to be poor and happy than rich and miserable, but how about a compromise like moderately rich and just moody?

3. Being a princess isn’t all it’s cracked up to be.

6. I’d like to be a queen in people’s hearts but I don’t see myself being queen of this country.

7. Everyone needs to be valued. Everyone has the potential to give something back.

8. Only do what your heart tells you.

10. HIV does not make people dangerous to know, so you can shake their hands and give them a hug : Heaven knows they need it.

11. I love to hold people’s hands when I visit hospitals, even though they are shocked because they haven’t experienced anything like it before, but to me it is a normal thing to do.

12. Nothing gives me more happiness than to try to aid the most vulnerable of this society. Whoever is in distress who calls me, I will come running.

13. I want my boys to have an understanding of people’s emotions, their insecurities, people’s distress, and their hopes and dreams.

14. Any sane person would have left long ago. But I cannot. I have my sons.

15. I will fight for my children on any level so they can reach their potential as human beings and in their public duties.

16. People think that at the end of the day a man is the only answer. Actually, a fulfilling job is better for me.

18. When you are happy you can forgive a great deal.

19. Hugs can do great amounts of good – especially for children.

20. Anywhere I see suffering, that is where I want to be, doing what I can.

21. The greatest problem in the world today is intolerance. Everyone is so intolerant of each other.