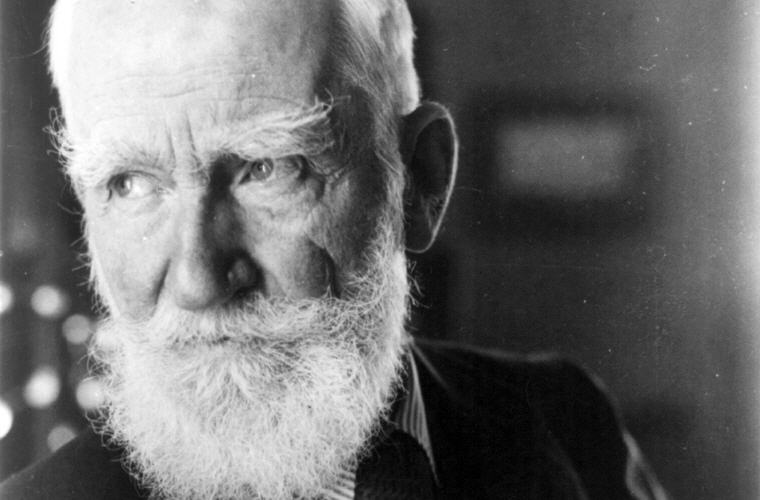 2. Love is a simple thing and a deep thing: it is an act of life and not an illusion. Art is an illusion.

3. First love is only a little foolishness and a lot of curiosity: no really self-respecting woman would take advantage of it.

Excerpt from Wikipedia: George Bernard Shaw (26 July 1856 – 2 November 1950), known at his insistence simply as Bernard Shaw, was an Anglo-Irish playwright, critic, and polemicist whose influence on Western theatre, culture, and politics extended from the 1880s to his death and beyond. He wrote more than sixty plays, including major works such as Man and Superman (1903), Pygmalion (1913), and Saint Joan (1923). With a range incorporating both contemporary satire and historical allegory, Shaw became the leading dramatist of his generation, and in 1925 was awarded the Nobel Prize in Literature.
_____________________

1. Attention and activity lead to mistakes as well as to successes; but a life spent in making mistakes is not only more honorable but more useful than a life spent doing nothing.

#3 Plays Political: The Apple Cart, On the Rocks, Geneva

3. I never resist temptation because I have found that things that are bad for me do not tempt me.

#4 The Intelligent Woman’s Guide to Socialism and Capitalism, Chapter 8, 1928

4. Perhaps the greatest social service that can be rendered by anybody to the country and to mankind is to bring up a family.

6. The worst sin towards our fellow creatures is not to hate them, but to be indifferent to them: that’s the essence of inhumanity.

7. Liberty means responsibility. That is why most men dread it.

8. Take care to get what you like or you will be forced to like what you get.

9. Do not do unto others as you would expect they should do unto you. Their tastes may not be the same.

12. What is life but a series of inspired follies? The difficulty is to find them to do. Never lose a chance: it doesn’t come every day.

13. You cannot believe in honor until you have achieved it. Better keep yourself clean and bright: you are the window through which you must see the world.

#14-15 The Intelligent Woman’s Guide to Socialism and Capitalism, 1928

14. … if you leave the smallest corner of your head vacant for a moment, other people’s opinions will rush in from all quarters …

15. The moment we want to believe something, we suddenly see all the arguments for it, and become blind to the arguments against it.

16. No man who is occupied in doing a very difficult thing, and doing it very well, ever loses his self-respect.

19. Imagination is the beginning of creation. You imagine what you desire; you will what you imagine; and at last you create what you will.

20. Life is not meant to be easy, my child; but take courage: it can be delightful.

21. There are two tragedies in life. One is not to get your heart’s desire. The other is to get it.

22. There is no love sincerer than the love of food.

23. The only man I know who behaves sensibly is my tailor; he takes my measurements anew each time he sees me. The rest go on with their old measurements and expect me to fit them.

24. I am afraid we must make the world honest before we can honestly tell our children that honesty is the best policy.

25. A learned man is an idler who kills time with study. Beware of his false knowledge: it is more dangerous than ignorance.

1. Love is a gross exaggeration of the difference between one person and everybody else.

2. Few people think more than two or three times a year; I have made an international reputation for myself by thinking once or twice a week.

3. A gentleman is one who puts more into the world than he takes out.

6. Life is no ‘brief candle’ to me. It is a sort of splendid torch which I have got hold of for the moment, and I want to make it burn as brightly as possible.