1. In order to create there must be a dynamic force, and what force is more potent than love? 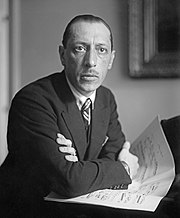 Excerpt from Wikipedia: Igor Fyodorovich Stravinsky (Russian: Игорь Фёдорович Стравинский, Igor’ Fjodorovič Stravinskij) (17 June 1882 – 6 April 1971) was a Russian composer, pianist, and conductor, widely acknowledged as one of the most important and influential composers of 20th century music. He was a quintessentially cosmopolitan Russian who was named by Time magazine as one of the 100 most influential people of the century. In addition to the recognition he received for his compositions, he also achieved fame as a pianist and a conductor, often at the premieres of his works.
_____________________________________

1. To listen is an effort, and just to hear is no merit. A duck hears also.

2. A good composer does not imitate; he steals.

3. Sins cannot be undone, only forgiven.

4. Silence will save me from being wrong (and foolish), but it will also deprive me of the possibility of being right.

5. The trouble with music appreciation in general is that people are taught to have too much respect for music they should be taught to love it instead.

6. Just as appetite comes from eating, so work brings inspiration, if inspiration is not discernible at the beginning.

7. The principle of the endless melody is the perpetual becoming of a music that never had any reason for starting, any more than it has any reason for ending.

9. I am in the present. I cannot know what tomorrow will bring forth. I can know only what the truth is for me today. That is what I am called upon to serve, and I serve it in all lucidity.

10. The real composer thinks about his work the whole time; he is not always conscious of this, but he is aware of it later when he suddenly knows what he will do.

11. A good composer does not imitate; he steals.

12. Music is given to us with the sole purpose of establishing an order in things, including, and particularly, the coordination between man and time.