2. If you love two people at the same time, choose the second. Because if you really loved the first one, you wouldn’t have fallen for the second.

3. There are four questions of value in life … What is sacred? Of what is the spirit made? What is worth living for, and what is worth dying for? The answer to each is same. Only love.

4. The only creatures that are evolved enough to convey pure love are dogs and infants.

5. Laugh as much as you breathe and love as long as you live. 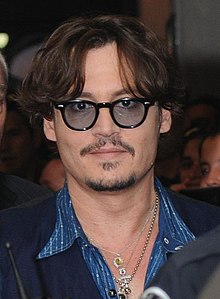 Excerpt from Wikipedia: John Christopher “Johnny” Depp II (born June 9, 1963) is an American actor, film producer, and musician. He has won the Golden Globe Award and Screen Actors Guild award for Best Actor. Depp rose to prominence on the 1980s television series 21 Jump Street, becoming a teen idol. Dissatisfied with that status, Depp turned to film for more challenging roles; he played the title character of the acclaimed Edward Scissorhands (1990) and later found box office success in films such as Sleepy Hollow (1999), Charlie and the Chocolate Factory (2005), Alice in Wonderland (2010), Rango (2011) and the Pirates of the Caribbean film series (2003–present). He has collaborated with director and friend Tim Burton in eight films; the most recent being Dark Shadows (2012).
_____________________________________

2. We’re all damaged in our own way. Nobody’s perfect. I think we’re all somewhat screwy. Every single one of us.

3. When kids hit 1 year old, it’s like hanging out with a miniature drunk. You have to hold onto them. They bump into things. They laugh and cry. They urinate. They vomit.

4. I don’t think anybody’s necessarily ready for death. You can only hope that when it approaches, you feel like you’ve said what you wanted to say. Nobody wants to go out in mid-sentence.

5. I think everybody’s weird. We should all celebrate our individuality and not be embarrassed or ashamed of it.

6. Just keep moving forward and don’t give a shit about what anybody thinks. Do what you have to do, for you.

7. I think the thing to do is to enjoy the ride while you’re on it.

8. I am doing things that are true to me. The only thing I have a problem with is being labeled.

9. One of the greatest pieces of advice I’ve ever gotten in my life was from my mom. When I was a little kid there was a kid who was bugging me at school and she said “Okay, I’m gonna tell you what to do. If the kid’s bugging you and puts his hands on you; you pick up the nearest rock …”

11. When I see someone who just follows their dream and succeeds, and just does basically what they want to do and doesn’t have to answer to anyone, obviously not harming anyone, that’s great.

12. I suppose nowadays it’s all a question of surgery, isn’t it? Of course the notion is beautiful, the idea of staying a boy and a child forever, and I think you can. I have known plenty of people who, in their later years, had the energy of children and the kind of curiosity and fascination with things like little children. I think we can keep that, and I think it’s important to keep that part of staying young. But I also think it’s great fun growing old.