1. Before I met my husband, I’d never fallen in love. I’d stepped in it a few times.

2. I love being married. It’s so great to find that one special person you want to annoy for the rest of your life.

3. Whenever I date a guy, I think, “Is this the man I want my children to spend their weekends with? 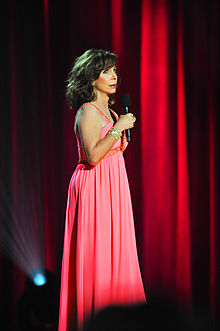 Rudner was born in Miami, Florida, the daughter of Frances, a homemaker, and Abe Rudner, a lawyer. Her mother died when she was 13. After graduating from high school at 15, Rudner left Miami and headed to New York City to embark on a career as a dancer. She appeared in several Broadway shows, including the now-legendary original productions of Follies and Mack & Mabel.

Rudner did not turn to comedy until she was 25, after observing how few female comedians there were compared to the number of female dancers. She spent many hours researching her favorite comedians, including Woody Allen and Jack Benny. She enjoys Jewish humor, but reserves her Jewish jokes for Jewish audiences.
____________________________________

1. A man will go to war, fight and die for his country. But he won’t get a bikini wax.

2. I don’t plan to grow old gracefully. I plan to have face-lifts until my ears meet.

3. Men reach their sexual peak at eighteen. Women reach theirs at thirty-five. Do you get the feeling that God is playing a practical joke?

4. We’ve begun to long for the pitter-patter of little feet – so we bought a dog. Well, it’s cheaper, and you get more feet.

5. I got kicked out of ballet class because I pulled a groin muscle. It wasn’t mine.

6. Some women hold up dresses that are so ugly and they always say the same thing: ‘This looks much better on.’ On what? On fire?

8. I think men who have a pierced ear are better prepared for marriage. They’ve experienced pain and bought jewelry.

9. I know I want to have children while my parents are still young enough to take care of them.

10. I want to have children, but my friends scare me. One of my friends told me she was in labor for 36 hours. I don’t even want to do anything that feels good for 36 hours.

11. My husband and I are either going to buy a dog or have a child. We can’t decide whether to ruin our carpet or ruin our lives.

12. Neurotics build castles in the air, psychotics live in them. My mother cleans them.

14. The word ‘aerobics’ came about when the gym instructors got together and said: If we’re going to charge $10 an hour, we can’t call it Jumping up and down.

15. Men hate to lose. I beat my husband once at tennis. I asked him, “Will we ever make love again?” He said, “Yes…. but not with each other.

16. My husband gave me a necklace. It’s fake. I requested fake. Maybe I’m paranoid, but in this day and age, I don’t want something around my neck that’s worth more than my head.

17. I never know what to get my father for his birthday. I gave him a hundred dollars and said, ‘Buy yourself something that will make your life easier.’ So he went out and bought a present for my mother.

18. I love to sleep. Do you? Isn’t it great? It really is the best of both worlds. You get to be alive and unconscious.

20. A good place to meet a man is at the dry cleaner. These men usually have jobs and bathe.