1. David Norris: All I have are the choices I make, and I choose her, come what may.

2. I’m not some hopeless romantic. I would never allow myself to be that way, but once I’ve felt, even for a moment, what I felt with you … I didn’t want to settle for less. 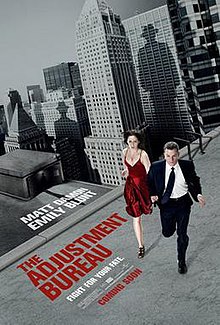 Excerpt from Wikipedia: Adjustment Bureau is a 2011 American film loosely based on the Philip K. Dick short story, “Adjustment Team”. A romantic thriller, the film was written and directed by George Nolfi and stars Matt Damon and Emily Blunt. The cast also includes Anthony Mackie, John Slattery, Michael Kelly, and Terence Stamp. The score was composed by Thomas Newman, with two songs by Richard Ashcroft (“Future’s Bright” for the opening sequence; “Are You Ready?” for the closing credits).
_____________________________________

1. Harry Mitchell: Being earlier is just as bad as being late.

2. Harry Mitchell: [talks to David] You’re going to look for her, aren’t you? You won’t find her. They’ll make sure of it. Even if they weren’t trying to stop you, there are nine million people in this city. You’ll never find her. Forget about her. Move on with your life.

3. Richardson: Very few humans have seen what you’ve seen today. And we’re determined to keep it that way. So, if you *ever* reveal our existence, we’ll erase your brain. The intervention team will be sent, your emotions, your memories, your entire personality, will be expunged. Your friends and family will think you’ve gone crazy. You, well, you won’t think anything.

5. Harry Mitchell: Most people live life on the path we set for them, too afraid to explore any other. But once in a while people like you come along who knock down all the obstacles we put in your way. People who realize freewill is a gift that you’ll never know how to use until you fight for it. I think that’s the chairman’s real plan. And maybe, one day, we won’t write the plan. You will.