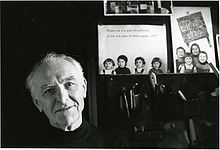 1. Nowadays people’s visual imagination is so much more sophisticated, so much more developed, particularly in young people, that now you can make an image which just slightly suggests something, they can make of it what they will.

2. I would never have dared to photograph people like that. Lovers kissing in the street, those couples are rarely legitimate.

3. The marvels of daily life are exciting; no movie director can arrange the unexpected that you find in the street.