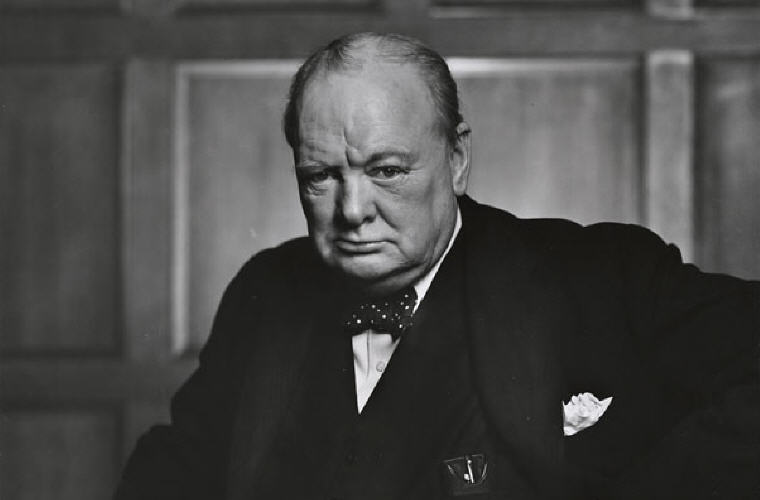 1. My ability to persuade my wife to marry me [was] quite my most brilliant achievement…

Excerpt from Wikipedia: Sir Winston Leonard Spencer-Churchill (30 November 1874 – 24 January 1965) was a British politician known chiefly for his leadership of the United Kingdom during World War II. He is widely regarded as one of the great wartime leaders. He served as Prime Minister from 1940 to 1945 and again from 1951 to 1955. A noted statesman and orator, Churchill was also an officer in the British Army, a historian, writer and artist. To date, he is the only British Prime Minister to have received the Nobel Prize in Literature, and the first person to be recognised as an honorary citizen of the United States.
________________

1. …no boy or girl should ever be disheartened by lack or success in their youth but should diligently and faithfully continue to persevere and make up for lost time.

2. For myself I am an optimist—it does not seem to be much use being anything else—and I cannot believe that the human race will not find its way through the problems that confront it…

3. We shall draw from the heart of suffering itself the means of inspiration and survival.

#5 House of Commons, 1 July 1952, Churchill by Himself: In His Own Words, Richard M. Langworth

5. What is a prisoner of war? He is a man who has tried to kill you and, having failed to kill you, asks you not to kill him.

#6 My Second Visit to Washington, The Hinge of Fate, Houghton Mifflin Harcourt, 1948

6. Although personally I am quite content with the existing explosives, I feel we must not stand in the path of improvement…

7. You create your own universe as you go along. The stronger your imagination, the more variegated your universe. When you leave off dreaming, the universe ceases to exist.

8. Do not be fobbed off with mere personal success or acceptance. You will make all kinds of mistakes; but as long as you are generous and true, and also fierce, you cannot hurt the world or even seriously distress her. She was made to be wooed and won by youth. She has lived and thrived only by repeated subjugations.

#9 10 October 1908, Kinnaird Hall, Dundee, Quoted in Churchill by Himself: In His Own Words

9. What is the use of living, if it be not to strive for noble causes and to make this muddled world a better place for those who will live in it after we are gone?

10. Courage is rightly esteemed the first of human qualities, because, as has been said, it is the quality which guarantees all others.

12. Criticism may not be agreeable, but it is necessary. It fulfils the same function as pain in the human body; it calls attention to the development of an unhealthy state of things. If it is heeded in time, danger may be averted; if it is suppressed, a fatal distemper may develop.

13. Healthy citizens are the greatest asset any country can have.

15. I never “worry” about action, but only about inaction.

16. If the human race wishes to have a prolonged and indefinite period of material prosperity, they have only got to behave in a peaceful and helpful way towards one another, and science will do for them all that they wish and more than they can dream….Nothing is final. Change is unceasing and it is likely that mankind has a lot more to learn before it comes to its journey’s end… (Guildhall, London, 9 November 1954)

17. It is a good thing for an uneducated man to read books of quotations.

18. It is a mistake to look too far ahead. Only one link in the chain of destiny can be handled at a time.