1. We look forward to the time when the power to love will replace the love of power. Then will our world know the blessings of peace.

2. Faith is love taking the form of aspiration.

3. Science and art may invent splendid modes of illuminating the apartments of the opulent: but these are all poor and worthless compared with the common light which the sun sends into all our windows, which pours freely, impartially over hill and valley, which kindles daily the eastern and western sky; and so the common lights of reason, and conscience, and love, are of more worth and dignity than the rare endowments which give celebrity to a few.
____________________________________ 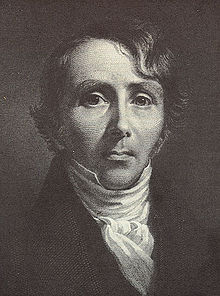 Excerpt from Wikipedia: Dr. William Ellery Channing (April 7, 1780 – October 2, 1842) was the foremost Unitarian preacher in the United States in the early nineteenth century and, along with Andrews Norton, one of Unitarianism’s leading theologians. He was known for his articulate and impassioned sermons and public speeches, and as a prominent thinker in the liberal theology of the day. Dr. Channing’s religion and thought were among the chief influences on the New England Transcendentalists, though he never countenanced their views, which he saw as extreme.
____________________________________

1. The path to perfection is difficult to men in every lot; there is no royal road for rich or poor. But difficulties are meant to rouse, not discourage. The human spirit is to grow strong by conflict.

2. The more a person analyzes his inner self, the more insignificant he seems to himself. This is the first lesson of wisdom. Let us be humble, and we will become wise. Let us know our weakness, and it will give us power.

3. The best books for a man are not always those which the wise recommend, but often those which meet the peculiar wants, the natural thirst of his mind, and therefore awaken interest and rivet thought.

4. Great minds are to make others great. Their superiority is to be used, not to break the multitude to intellectual vassalage, not to establish over them a spiritual tyranny, but to rouse them from lethargy, and to aid them to judge for themselves.

5. No one should part with their individuality and become that of another.

6. Fix your eyes on perfection and you make almost everything speed towards it.

7. To be prosperous is not to be superior, and should form no barrier between men. Wealth out not to secure the prosperous the slightest consideration. The only distinctions which should be recognized are those of the soul, of strong principle, of incorruptible integrity, of usefulness, of cultivated intellect, of fidelity in seeking the truth.

8. Every man is a volume if you know how to read him.

9. It is chiefly through books that we enjoy the communion with superior minds … In the best books, authors talk to us, give us their most precious thoughts, and pour their souls into ours. God be thanked for books.

10. Beauty is an all-pervading presence. It unfolds to the numberless flowers of the Spring; it waves in the branches of the trees and in the green blades of grass; it haunts the depths of the earth and the sea, and gleams out in the hues of the shell and the precious stone. And not only these minute objects, but the ocean, the mountains, the clouds, the heavens, the stars, the rising and the setting sun all overflow with beauty. The universe is its temple; and those people who are alive to it can not lift their eyes without feeling themselves encompassed with it on every side.

11. Every mind was made for growth, for knowledge, and its nature is sinned against when it is doomed to ignorance.

12. Error is discipline through which we advance.

13. It is not the quantity but the quality of knowledge which determines the mind’s dignity.

14. No power in society, no hardship in your condition can depress you, keep you down, in knowledge, power, virtue, influence, but by your own consent.

15. Nothing which has entered into our experience is ever lost.

16. Everything here but the soul of man is a passing shadow. The only enduring substance is within. When shall we awake to the sublime greatness, the perils, the accountableness, and the glorious destinies of the immortal soul?

17. Grandeur of character lies wholly in force of soul, that is, in the force of thought, moral principle, and love, and this may be found in the humblest condition of life.

19. Every human being has a work to carry on within, duties to perform abroad, influence to exert, which are peculiarly his, and which no conscience but his own can teach.

20. Real greatness has nothing to do with a man’s sphere. It does not lie in the magnitude of his outward agency, in the extent of the effects which he produces. The greatest men may do comparatively little.

21. May your life preach more loudly than your lips.