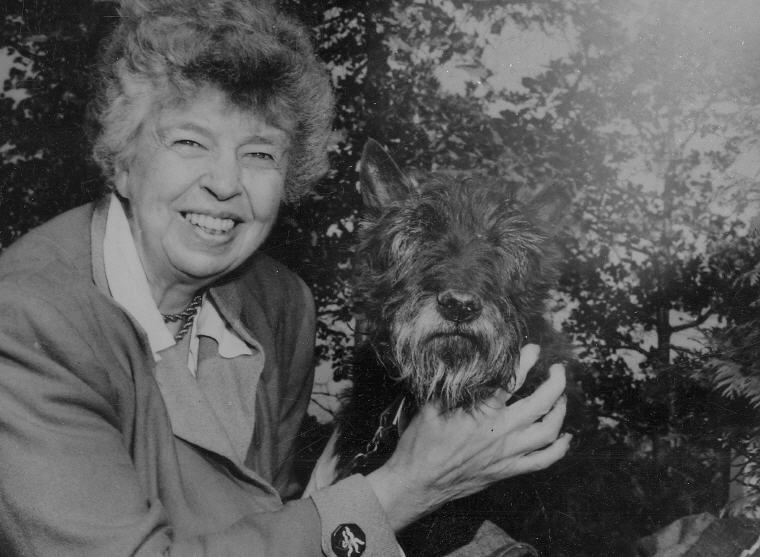 1. It takes courage to love, but pain through love is the purifying fire which those who love generously know. We all know people who are so much afraid of pain that they shut themselves up like clams in a shell and, giving out nothing, receive nothing and therefore shrink until life is a mere living death. (1 April 1939)

2. One of the blessings of age is to learn not to part on a note of sharpness, to treasure the moments spent with those we love, and to make them whenever possible good to remember, for time is short. (5 February 1943)

Excerpt from Wikipedia: Anna Eleanor Roosevelt (October 11, 1884 – November 7, 1962) was the First Lady of the United States from 1933 to 1945. She supported the New Deal policies of her husband, Franklin D. Roosevelt, and assumed a role as an advocate for civil rights. After her husband’s death in 1945, Roosevelt continued to be an internationally prominent author, speaker, politician, and activist for the New Deal coalition. She worked to enhance the status of working women, although she opposed the Equal Rights Amendment because she believed it would adversely affect women.
_______________

1. I believe that anyone who thinks must think of the next war as they would of suicide.

2. Autobiographies are, after all, only useful as the lives you read about and analyze may suggest to you something that you may find useful in your own journey through life.

4. And the purpose of life, after all, is to live it, to taste experience to the utmost, to reach out eagerly and without fear for newer and richer experience. (Foreword, January 1960)

5. In the long run, we shape our lives, and we shape ourselves. The process never ends until we die. And the choices we make are ultimately our own responsibility. (Foreword, January 1960)

6. For freedom makes a huge requirement of every human being. With freedom comes responsibility. For the person who is unwilling to grow up, the person who does not want to carry his own weight, this is a frightening prospect. (Page 152)

7. Too many of us stay walled up because we are afraid of being hurt. We are afraid to care too much, for fear that the other person does not care at all. (Page 16)

8. I learned something which has stood me in good stead many times—The most important thing in any relationship is not what you get but what you give.

9. I cannot believe that war is the best solution. No one won the last war, and no one will win the next war.

10. There never has been security. No man has ever known what he would meet around the next corner; if life were predictable it would cease to be life, and be without flavor. (Page 80)

11. What we must learn to do is to create unbreakable bonds between the sciences and the humanities. We cannot procrastinate. The world of the future is in our making. Tomorrow is now. (Page 134)

12. It is not fair to ask of others what you are not willing to do yourself. [S]

14. A little simplification would be the first step towards rational living, I think. [S]

15. When you cease to make a contribution, you begin to die.

16. When will our consciences grow so tender that we will act to prevent human misery rather than avenge it?

17. Long ago, I made up my mind that, when things were said involving only me, I would pay no attention to them, except when valid criticism was carried by which I could profit. [S]

18. You gain strength, courage and confidence by every experience in which you really stop to look fear in the face. You are able to say to yourself, “I have lived through this horror. I can take the next thing that comes along.”

19. Happiness is not a goal, it is a by-product. Paradoxically, the one sure way not to be happy is deliberately to map out a way of life in which one would please oneself completely and exclusively.

20. Make that decision primarily for yourself because you can never really live anyone else’s life not even your child’s. The influence you exert is through your own life & what you become yourself.

22. Anyone who knows history, particularly the history of Europe, will, I think, recognize that the domination of education or of government by any one particular religious faith is never a happy arrangement for the people.

23. Whatever happens, I feel that on the Democratic side the President has made a good fight; and in political life I have never felt that anything really mattered but the satisfaction of knowing that you stood for the things in which you believed, and had done the very best you could. [S]

24. You get more joy out of the giving to others, and should put a good deal of thought into the happiness you are able to give.

26. When life is too easy for us, we must beware or we may not be ready to meet the blows which sooner or later come to everyone, rich or poor. [S]

27. People grow through experiences, if they meet life honestly and courageously. This is how character is built and young people recognize this ability to grow in those with whom they come in contact. [S]

28. Life was meant to be lived, and curiosity must be kept alive. One must never, for whatever reason, turn his back on life.

29. I’m so glad I never feel important, it does complicate life!

30. No writing has any real value which is not the expression of genuine thought and feeling. [S]

31. At all times, day by day, we have to continue fighting for freedom of religion, freedom of speech, freedom from fear, and freedom from want—for these are things that must be gained in peace as well as in war. [S]

32. In our country we must trust the people to hear and see both the good and the bad and to choose the good. [S]

34. As long as we are not actually destroyed, we can work to gain greater understanding of other peoples and to try to present to the peoples of the world the values of our own beliefs. We can do this by demonstrating our conviction that human life is worth preserving and that we are willing to help others to enjoy benefits of our civilization just as we have enjoyed it. [S]
_______________

1. The giving of love is an education in itself.

3. Friendship with ones self is all important, because without it one cannot be friends with anyone else in the world.

4. I believe that anyone can conquer fear by doing the things he fears to do, provided he keeps doing them until he gets a record of successful experience behind him.

5. No one can make you feel inferior without your consent.

6. The future belongs to those who believe in the beauty of their dreams.

7. A woman is like a tea bag; you never know how strong it is until it’s in hot water.

8. As for accomplishments, I just did what I had to do as things came along.

9. Only a man’s character is the real criterion of worth.

10. It seems to me of great importance to teach children respect for life. Towards this end, experiments on living animals in classrooms should be stopped. To encourage cruelty in the name of science can only destroy the finer emotions of affection and sympathy, and breed an unfeeling callousness in the young towards suffering in all living creatures.

11. Beautiful young people are accidents of nature, But beautiful old people are works of art.

12. Hate and force cannot be in just a part of the world without having an effect on the rest of it.

#1 William L. Watkinson: The Supreme Conquest and Other Sermons Preached in America

1. Yet is it far better to light the candle than to curse the darkness. – William L. Watkinson [S]