1. No one is born hating another person because of the colour of his skin, or his background, or his religion. People must learn to hate, and if they can learn to hate, they can be taught to love, for love comes more naturally to the human heart than its opposite.

2. True reconciliation does not consist in merely forgetting the past. It does not rest with black forgiveness, sensitivity to white fears and tolerance of an unjust status quo, on one hand, and white gratitude and appreciation underlined by a tenacious clinging to exclusive privilege, on the other.

#3 Lighting your way to a better future: Speech at launch of Mindset Network

3. Education is the most powerful weapon we can use to change the world…

#4 Speech at Cape Town City Hall: ‘Africa It Is Ours!’

4. My friends, comrades and fellow South Africans, I greet you all in the name of peace, democracy and freedom for all. I stand here before you not as a prophet but as a humble servant of you, the people.

Your tireless and heroic sacrifices have made it possible for me to be here today. I therefore place the remaining years of my life in your hands.

6. Men of peace must not think about retribution or recriminations. Courageous people do not fear forgiving, for the sake of peace.

#7 I am Prepared to Die, Statement in the Rivonia Trial, Pretoria Supreme Court, 20 April 1964

7. During my lifetime I have dedicated myself to this struggle of the African people. I have fought against white domination, and I have fought against black domination. I have cherished the ideal of a democratic and free society in which all persons will live together in harmony and with equal opportunities. It is an ideal which I hope to live for. But, my lord, if needs be, it is an ideal for which I am prepared to die. 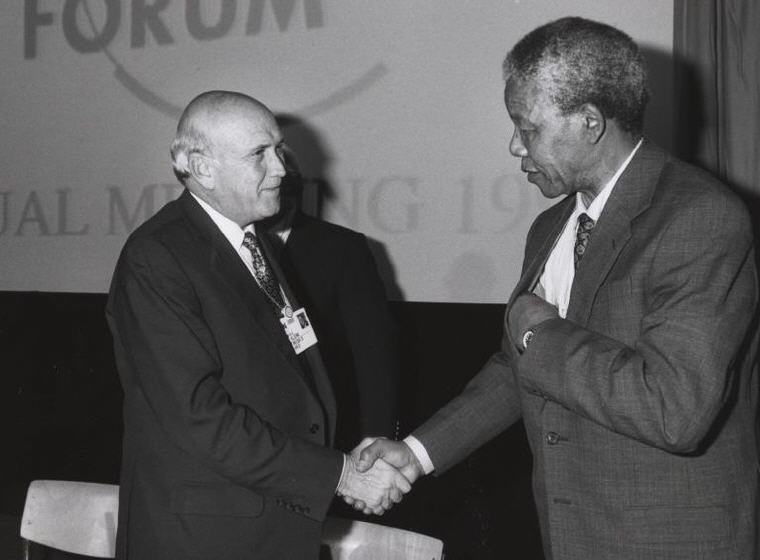 #8-12 Long Walk to Freedom: The Autobiography of Nelson Mandela

8. I detest racialism because I regard it as a barbaric thing, whether it comes from a black man or a white man.

9. I learned that courage was not the absence of fear, but the triumph over it. The brave man is not he who does not feel afraid, but he who conquers that fear.

10. I have never cared very much for personal prizes. A man does not become a freedom fighter in the hope of winning awards, but when I was notified that I had won the 1993 Nobel Peace Prize jointly with Mr de Klerk, I was deeply moved. The Nobel Peace Prize had a special meaning to me because of its involvement with South African history.

11. Without language, one cannot talk to people and understand them; one cannot share their hopes and aspirations, grasp their history, appreciate their poetry or savour their songs.

12. I am fundamentally an optimist. Whether that comes from nature or nurture, I cannot say. Part of being optimistic is keeping one’s head pointed toward the sun, one’s feet moving forward. There were many dark moments when my faith in humanity was sorely tested, but I would not and could not give myself up to despair. That way lays defeat and death.

13. Prison itself is a tremendous education in the need for patience and perseverance. It is above all a test of one’s commitment.

14. Education is the great engine of personal development. It is through education that the daughter of a peasant can become a doctor, that the son of a mineworker can become the head of the mine, that a child of farmworkers can become the president of a great nation. It is what we make out of what we have, not what we are given, that separates one person from another.

15. For to be free is not merely to cast off one’s chains, but to live in a way that respects and enhances the freedom of others.

16. I have walked that long road to freedom. I have tried not to falter; I have made missteps along the way. But I have discovered the secret that after climbing a great hill, one only finds that there are many more hills to climb. I have taken a moment here to rest, to steal a view of the glorious vista that surrounds me, to look back on the distance I have come. But I can rest only for a moment, for with freedom comes responsibilities, and I dare not linger, for my long walk is not yet ended.

17. But freedom would be meaningless without security in the home and in the streets.

18. I really wanted to retire and rest and spend more time with my children, my grandchildren and of course with my wife. But the problems are such that for anybody with a conscience who can use whatever influence he may have to try to bring about peace, it’s difficult to say no.

#19 Address to the people of Cape Town, Grand Parade, on the occasion of his inauguration as State President, 9 May 1994

19. Democracy is based on the majority principle. This is especially true in a country such as ours where the vast majority have been systematically denied their rights. At the same time, democracy also requires that the rights of political and other minorities be safeguarded.

20. Never, never and never again shall it be that this beautiful land will again experience the oppression of one by another and suffer the indignity of being the skunk of the world.

21. I raise the question, how can I be expected to believe that this same racial discrimination which has been the cause of so much injustice and suffering right through the years should now operate here to give me a fair and open trial?

22. No one truly knows a nation until one has been inside its jails. A nation should not be judged by how it treats its highest citizens but its lowest ones.

24. The greatest glory in living lies not in never falling, but in rising every time we fall.

25. A good head and a good heart are always a formidable combination.

26. When a man is denied the right to live the life he believes in, he has no choice but to become an outlaw.

27. I have always believed that exercise is the key not only to physical health but to peace of mind. 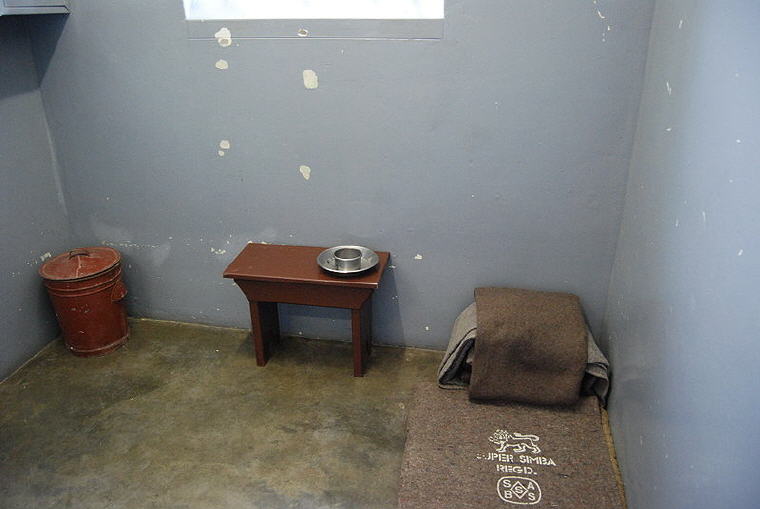 28. As I walked out the door toward the gate that would lead to my freedom, I knew if I didn’t leave my bitterness and hatred behind, I’d still be in prison.

29. What counts in life is not the mere fact that we have lived. It is what difference we have made to the lives of others that will determine the significance of the life we lead.

30. It is never my custom to use words lightly. If twenty-seven years in prison have done anything to us, it was to use the silence of solitude to make us understand how precious words are and how real speech is in its impact on the way people live and die.

31. Those who conduct themselves with morality, integrity and consistency need not fear the forces of inhumanity and cruelty.

32. Everyone can rise above their circumstances and achieve success if they are dedicated to and passionate about what they do.

#33 Interview for the documentary Mandela, 1994

33. Death is something inevitable. When a man has done what he considers to be his duty to his people and his country, he can rest in peace. I believe I have made that effort and that is, therefore, why I will sleep for the eternity. 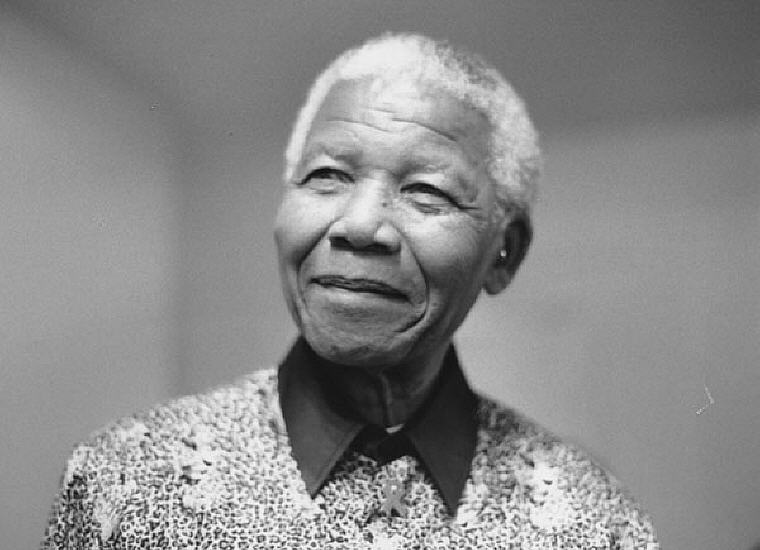 Lecture at LSE on Africa and Its Position in the World, Photo credit: Wikipedia

34. Difficulties break some men but make others. No axe is sharp enough to cut the soul of a sinner who keeps on trying, one armed with the hope that he will rise even in the end.

#35 From his unpublished autobiographical manuscript written in 1975

35. I like friends who have independent minds because they tend to make you see problems from all angles.

36. Only free men can negotiate; prisoners cannot enter into contracts. Your freedom and mine cannot be separated.

37. We are deeply concerned, both in our country and here, of the very large number of dropouts by schoolchildren. This is a very disturbing situation, because the youth of today are the leaders of tomorrow… try as much as possible to remain in school, because education is the most powerful weapon which we can use.

38. A critical, independent and investigative press is the lifeblood of any democracy. The press must be free from state interference. It must have the economic strength to stand up to the blandishments of government officials. It must have sufficient independence from vested interests to be bold and inquiring without fear or favour. It must enjoy the protection of the constitution, so that it can protect our rights as citizens.

39. Sometimes it falls upon a generation to be great. You can be that great generation. Let your greatness blossom.

40. We are really appalled by any country, whether a superpower or a small country, that goes outside the U.N. and attacks independent countries, No country should be allowed to take the law into their own hands.

1. We must use time wisely and forever realize that the time is always ripe to do right.

2. As I have said, the first thing is to be honest with yourself. You can never have an impact on society if you have not changed yourself… Great peacemakers are all people of integrity, of honesty, but humility.

4. It is better to lead from behind and to put others in front, especially when you celebrate victory when nice things occur. You take the front line when there is danger. Then people will appreciate your leadership.