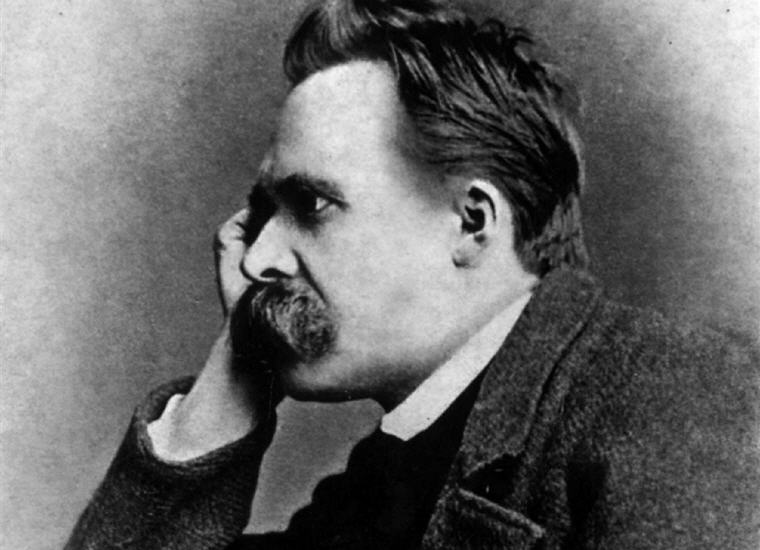 1. You have no idea what a charming memory you are to me.

#2 On Reading and Writing, The Portable Nietzsche, Penguin, 27 January 1977

#3 On The Gift-Giving Virtue, The Portable Nietzsche, Penguin, 27 January 1977

3. The man of knowledge must not only love his enemies, he must also be able to hate his friends.

#4 Section Four: Epigrams and Interludes, Beyond Good and Evil: Prelude to a Philosophy of the Future, OUP Oxford, 5 November 1998

4. What is done out of love always takes place beyond good and evil.

5. One ought to hold on to one’s heart; for if one lets it go, one soon loses control of the head too.

#6 Man Alone with Himself, Human, All Too Human: A Book for Free Spirits, U of Nebraska Press, 1 January 1996

6. Love and hatred are not blind, but are blinded by the fire they themselves carry with them.

7. Love is the state in which man sees things most decidedly as they are not.

8. One must learn to love.— This is what happens to us in music: First one has to learn to hear a figure and melody at all, to detect and distinguish it, to isolate it and delimit it as a separate life. Then it requires some exertion and good will to tolerate it in spite of its strangeness, to be patient with its appearance and expression, and kindhearted about its oddity. Finally there comes a moment when we are used to it, when we wait for it, when we sense that we should miss it if it were missing; and now it continues to compel and enchant us ruthlessly until we have become its humble and enraptured lovers who desire nothing better from the world than it and only it. But that is what happens to us not only in music. That is how we learned to love all things that we now love. In the end we are always rewarded for our good will, our patience, our fair-mindedness and gentleness with what is strange; gradually, it sheds its veil and turns out to be a new and indescribable beauty. That is its thanks for our hospitality. Even those who love themselves will have learned it in this way; for there is no other way. Love, too, has to be learned.

#9 Beyond good and evil, translated by Helen Zimmern [S]

9. Love brings to light the noble and hidden qualities of a lover—his rare and exceptional traits: it is thus liable to be deceptive as to his normal character.

#10 Beyond good and evil, translated by Helen Zimmern [S]

10. Love to one only is a barbarity, for it is exercised at the expense of all others. Love to God also!

Nietzsche’s key ideas include the “death of God,” the Übermensch, the eternal recurrence, the Apollonian and Dionysian dichotomy, perspectivism, and the will to power. Central to his philosophy is the idea of “life-affirmation”, which involves questioning of all doctrines that drain life’s expansive energies, however socially prevalent and radical those views might be. His influence remains substantial within philosophy, notably in existentialism, post-modernism, and post-structuralism, as well as outside it. His radical questioning of the value and objectivity of truth has been the focus of extensive commentary, especially in the continental tradition.
_______________

#1 Twilight of the Idols, translated in Man’s Search For Meaning, 1946 by Viktor Frankl

1. He who has a why to live for can bear almost any how.

2. He divines remedies against wrongs, he fully utilizes bad incidents to his advantage; what does not kill him makes him stronger.

#3-4 The Dawn of Day, Translated by John McFarland Kennedy [S]

3. It is not sufficient to prove a case, we must also tempt or raise men to it: hence the wise man must learn to convey his wisdom; and often in such a manner that it may sound like foolishness!

4. MASTERY.—We have reached mastery when we neither mistake nor hesitate in the achievement.

#5-7 The Portable Nietzsche, Edited and translated by WALTER KAUFMANN [S]

5. You say to me, “Life is hard to bear.” But why would you have your pride in the morning and your resignation in the evening? Life is hard to bear; but do not act so tenderly! We are all of us fair beasts of burden, male and female asses. What do we have in common with the rosebud, which trembles because a drop of dew lies on it?

6. Against that positivism which stops before phenomena, saying “there are only facts,” I should say: no, it is precisely facts that do not exist, only interpretations.

9. Never forget.—The higher we soar, the smaller we appear to those who cannot fly.

10. Sleeping is no mean art: for its sake one must stay awake all day.

11. He who would learn to fly one day must first learn to stand and walk and run and climb and dance: one cannot fly into flying.

#12 Beyond Good and Evil: prelude to a philosophy of the future, Macmillan, 1907

12. Blessed are the forgetful: for they “get the better” even of their blunders.

#13 On the Advantage and Disadvantage of History for Life, Hackett Publishing, 15 June 1980

13. I know of no better life’s purpose than to perish…in attempting the great and impossible.

#14 The Assorted Opinions and Maxims, Human, All Too Human: A Book for Free Spirits, Cambridge University Press, 7 November 1996

15. …the strongest have their moments of fatigue…

#16-17 Section Four: Epigrams and Interludes, Beyond Good and Evil: Prelude to a Philosophy of the Future, OUP Oxford, 5 November 1998

16. A person of genius is intolerable if he does not possess at least two other things: gratitude and cleanliness.

17. It is terrible to die of thirst on the ocean. Does your truth have to be so salty that it can no longer even—quench thirst?

18. But I am a giver of gifts: I like to give, as a friend to friends. Strangers, however, and the poor may themselves pluck the fruit from my tree: that will cause them less shame.

#19 Man Alone with Himself, Human, All Too Human: A Book for Free Spirits, U of Nebraska Press, 1 January 1996

19. Model for others. He who wants to set a good example must add a grain of foolishness to his virtue; then others can imitate and, at the same time, rise above the one being imitated — something which people love.

#20 Quoted in Nietzsche and the Problem of Rationality, Martin Conboy Dillon, University of California, 1964

20. Here the ways of men part: if you wish to strive for peace of soul and pleasure, then believe; if you wish to be a devotee of truth, then inquire.

#21 Beyond Good and Evil: Prelude to a Philosophy of the Future, OUP Oxford, 5 November 1998

21. What has shaken me is not that you lied to me, but that I no longer believe you.

22. But even if the future gave us no cause for hope—the fact of our existing at all in this here-and-now must be the strongest incentive to us to live according to our own laws and standards: the inexplicable fact that we live precisely today, when we had all infinite time in which to come into existence, that we possess only a shortlived today in which to demonstrate why and to what end we came into existence now and at no other time.

23. We are responsible to ourselves for our own existence; consequently we want to be the true helmsman of this existence and refuse to allow our existence to resemble a mindless act of chance.

24. No one can construct for you the bridge upon which precisely you must cross the stream of life, no one but you yourself alone.

25. There exists in the world a single path along which no one can go except you: whither does it lead? Do not ask, go along it.

#26 Beyond Good and Evil: Prelude to a Philosophy of the Future, OUP Oxford, 5 November 1998

26. Anyone who fights with monsters should take care that he does not in the process become a monster. And if you gaze for long into an abyss, the abyss gazes back into you.

#27-31 The Gay Science: With a Prelude in Rhymes and an Appendix of Songs, TRANSLATED BY Walter Kaufmann [S]

27. What does your conscience say? — “You shall become the person you are.”

28. What we do.— What we do is never understood but always only praised or censured.

29. I want to learn more and more to see as beautiful what is necessary in things; then I shall be one of those who make things beautiful.

30. For believe me: the secret for harvesting from existence the greatest fruitfulness and the greatest enjoyment is—to live dangerously!

31. …we want to be the poets of our life-first of all in the smallest most everyday matters.

#32 THE GENEALOGY OF MORALS, TRANSLATED BY HORACE B. SAMUEL [S]

32. An inability to take seriously for any length of time their enemies, their disasters, their misdeeds—that is the sign of the full strong natures who possess a superfluity of moulding plastic force, that heals completely and produces forgetfulness: a good example of this in the modern world is Mirabeau, who had no memory for any insults and meannesses which were practised on him, and who was only incapable of forgiving because he forgot. Such a man indeed shakes off with a shrug many a worm which would have buried itself in another; it is only in characters like these that we see the possibility (supposing, of course, that there is such a possibility in the world) of the real “love of one’s enemies.”

33. Hope, in its stronger forms, is a great deal more powerful stimulans to life than any sort of realized joy can ever be. Man must be sustained in suffering by a hope so high that no conflict with actuality can dash it—so high, indeed, that no fulfilment can satisfy it: a hope reaching out beyond this world.

34. And nothing on earth consumes a man more quickly than the passion of resentment.

35. He that prefers the beautiful to the useful in life will undoubtedly, like children who prefer sweetmeats to bread, destroy his digestion and acquire a very fretful outlook on the world.

36. Even the most courageous among us only rarely has the courage to face what he already knows.

#37 On Truth and Lies in a Nonmoral Sense, Translated by W. A. Haussmann

37. What does man actually know about himself? Is he, indeed, ever able to perceive himself completely, as if laid out in a lighted display case?

38. Lightning and thunder need time, the light of the stars needs time, deeds need time, even after they are done, to be seen and heard.

39. He who fights with monsters should be careful lest he thereby become a monster. And if thou gaze long into an abyss, the abyss will also gaze into thee.

40. One may indeed lie with the mouth; but with the accompanying grimace one nevertheless tells the truth.

1. It is not a lack of love, but a lack of friendship that makes unhappy marriages.

2. When marrying, ask yourself this question: Do you believe that you will be able to converse well with this person into your old age? Everything else in marriage is transitory.

3. There will always be rocks in the road ahead of us. They will be stumbling blocks or stepping stones; it all depends on how you use them.

4. You have your way. I have my way. As for the right way, the correct way, and the only way, it does not exist.