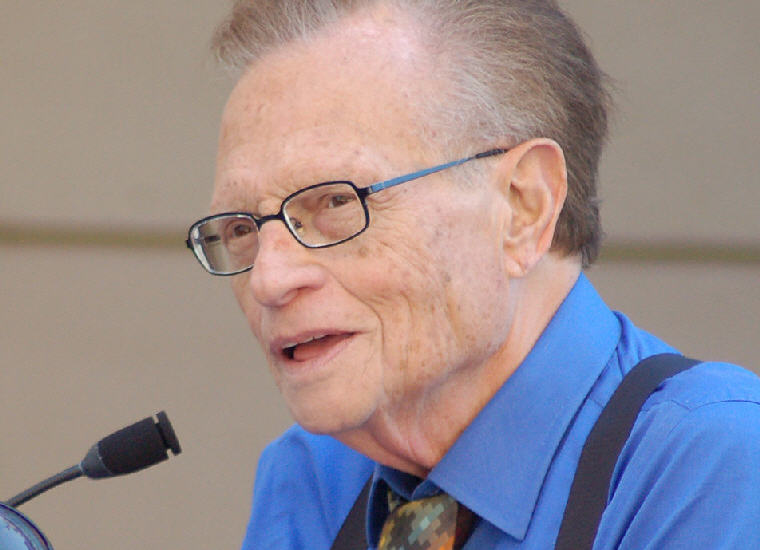 1. If I do something caring for a friend, I have no doubt in my mind they would do it for me.

2. If they asked me, I did two shifts. I did sports, I did news, because I loved it.

4. It’s the best thing I do. There’s no bigger kick for me than helping someone get their heart back.

Excerpt from Wikipedia: Larry King (November 19, 1933 – January 23, 2021) is an American television and radio host whose work has been recognized with awards including two Peabodys and ten Cable ACE Awards. He began as a local Florida journalist and radio interviewer in the 1950s and 1960s and became prominent as an all-night national radio broadcaster starting in 1978. From 1985 to 2010, he hosted the nightly interview TV program Larry King Live on CNN.
________________

#1-5 Larry King on His Love of Comedy, Jon Stewart, and Why He Doesn’t Think Brian Williams Will Ever Anchor Again, Jessica Pilot
26 February 2015 [S]

1. Laughter is a very subjective thing. If it’s funny to you it’s funny. And a lot of things are funny to me.

4. I’ll tell you the truth, I’ve had bad days and good days in my life, but I’ve never had a day when I didn’t enjoy that red light going on. Whether on the radio, or on television, there’s still a little bump every time it goes on. And if you can spend a life, if you can get paid well for doing something you absolutely love, well you can’t beat that.

6. My biggest fear is death, because I don’t think I’m going anywhere. And since I don’t think that, and I don’t have a belief … I’m married to someone who has the belief, so she knows she’s going somewhere.

7. People sometimes think I’m sort of all-knowing. When you reach a certain age and people see you on television, they look at you and think, ‘Wow! Everything must be great!’ Well, everything isn’t always great. You can be hailed on the streetcorner, but you still have to go home and take out the garbage. You have one kid who doesn’t want to go to school, another has an earache…

Here’s an example: My wife is late getting somewhere. One kid is yelling, another kid is out on his bike, and he hasn’t come home, and I’m out in front of the house looking for him, and a tour bus goes by. So I gotta stop and smile and wave at a tour bus. It’s like leading two lives, and it’s crazy.

9. I never learned anything when I was talking. That was always my motto.

#10-13 How to Talk to Anyone, Anytime, Anywhere: The Secrets of Good Communication, Larry King, Bill Gilbert

10. You cannot talk to people successfully if they think you are not interested in what they have to say or you have no respect for them.

11. The first rule of conversation: Listen.

12. I realize every morning that nothing I say today will teach me anything, so if I’m going to learn a lot today, I’ll have to do it by listening.

13. It’s true that talking has come naturally to me, but even those who have a natural ability for something have to work to develop it.

14. If you look at media now, all the hosts of these other shows are interviewing themselves. The guests are a prop for the hosts on these cable networks. The guest to me was always paramount.

16. I like to put a stake in people, because I know people helped me.

17. I worked on the United Parcel Service truck, I sold home delivery of milk. But always, in the back of my mind, I wanted to get into radio.

19. You can’t have happiness without having had unhappiness, because how else would you know what’s happy?

20. If you do something, expect consequences.

21. Getting your house in order and reducing the confusion gives you more control over your life. Personal organization some how releases or frees you to operate more effectively.

23. I’ve made a lot of mistakes. I’ve bonded with some people who use you, and some people that take advantage of you.

24. Those who have succeeded at anything and don’t mention luck are kidding themselves.