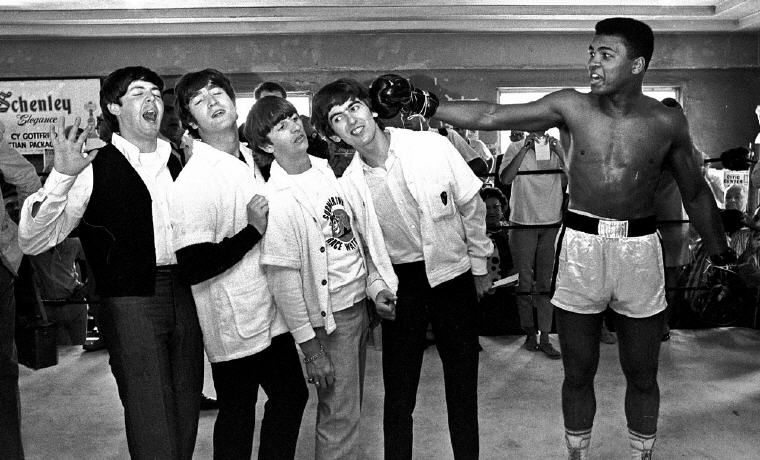 Muhammad Ali (born Cassius Marcellus Clay Jr., 17 January 1942 – 3 June 2016) was an American boxer who was the Heavyweight Champion of the World three times between 1964 and 1979. He was not only known for his quick skills and moves inside the ring, but also known for his inspiring, sometimes hilarious quotes he said throughout his life.

2. I never thought of losing, but now that it’s happened, the only thing is to do it right. That’s my obligation to all the people who believe in me. We all have to take defeats in life.

3. I hated every minute of it. But I said to myself, ‘Suffer now, and live the rest of your life as a champion’.

4. Age is whatever you think it is. You are as old as you think you are.

#5 Redemption Song: Muhammad Ali and the Spirit of the Sixties, 1999, by Mike Marqusee

5. Why should they ask me to put on a uniform and go 10,000 miles from home and drop bombs and bullets on Brown people in Vietnam while so-called Negro people in Louisville are treated like dogs and denied simple human rights? No I’m not going 10,000 miles from home to help murder and burn another poor nation simply to continue the domination of white slave masters of the darker people the world over. This is the day when such evils must come to an end. I have been warned that to take such a stand would cost me millions of dollars. But I have said it once and I will say it again. The real enemy of my people is here. I will not disgrace my religion, my people or myself by becoming a tool to enslave those who are fighting for their own justice, freedom and equality. If I thought the war was going to bring freedom and equality to 22 million of my people they wouldn’t have to draft me, I’d join tomorrow. I have nothing to lose by standing up for my beliefs. So I’ll go to jail, so what? We’ve been in jail for 400 years.

6. Religions all have different names, but they all contain the same truths … I think the people of our religion should be tolerant and understand people believe different things.

7. What’s really hurting me, the name Islam is involved, and Muslim is involved and causing trouble and starting hate and violence … Islam is not a killer religion … Islam means peace, I couldn’t just sit home and watch people label Muslims as the reason for this problem.

8. I’m retiring because there are more pleasant things to do than beat up people.

9. It’s a lack of faith that makes people afraid of meeting challenges, and I believe in myself.

11. I’m not the greatest; I’m the double greatest. Not only do I knock ’em out, I pick the round.

12. I’d like for them to say he took a few cups of love, he took one tablespoon of patience, teaspoon of generosity, one pint of kindness. He took one quart of laughter, one pinch of concern, and then, he mix willingness with happiness, he added lots of faith, and he stirred it up well, then he spreads it over his span of a lifetime, and he served it to each and every deserving person he met.

13. Friendship is a priceless gift that cannot be bought nor sold, but its value is far greater than a mountain made of gold; for gold is cold and lifeless – it can neither see nor hear, in time of trouble its powerless to cheer — it has no ears to listen, no heart to understand, it cannot bring you comfort or reach out a helping hand. So when you ask God for a gift, be thankful if sends not diamonds, pearls or riches but the love of real true friends.

14. I am a Muslim and there is nothing Islamic about killing innocent people in Paris, San Bernardino, or anywhere else in the world … True Muslims know that the ruthless violence of so called Islamic Jihadists goes against the very tenets of our religion … We as Muslims have to stand up to those who use Islam to advance their own personal agenda… They have alienated many from learning about Islam. True Muslims know or should know that it goes against our religion to try and force Islam on anybody.

15. Over the years my religion has changed and my spirituality has evolved. Religion and spirituality are very different, but people often confuse the two. Some things cannot be taught, but they can be awakened in the heart. Spirituality is recognizing the divine light that is within us all. It doesn’t belong to any particular religion; it belongs to everyone.

16. We all have the same God, we just serve him differently. Rivers, lakes, ponds, streams, oceans all have different names, but they all contain water. So do religions have different names, and they all contain truth, expressed in different ways forms and times. It doesn’t matter whether you’re a Muslim, a Christian, or a Jew. When you believe in God, you should believe that all people are part of one family. If you love God, you can’t love only some of his children.

17. My soul has grown over the years, and some of my views have changed. As long as I am alive, I will continue to try to understand more because the work of the heart is never done. All through my life I have been tested. My will has been tested, my courage has been tested, my strength has been tested. Now my patience and endurance are being tested. Every step of the way I believe that God has been with me. And, more than ever, I know that he is with me now. I have learned to live my life one step, one breath, and one moment at a time, but it was a long road. I set out on a journey of love, seeking truth, peace and understanding. l am still learning.

18. Wouldn’t it be a beautiful world if just 10 percent of the people who believe in the power of love would compete with one another to see who could do the most good for the most people? So many of us enjoy taking part in competitions, why not hold a competition of love instead of one that leads to jealousy and envy? If we continue to think and live as if we belong only to different cultures and different religions, with separate missions and goals, we will always be in self-defeating competition with each other.

19. Once we realize we are all members of humanity, we will want to compete in the spirit of love. In a competition of love we would not be running against one another, but with one another. We would be trying to gain victory for all humanity. If I am a faster runner than you, you may feel bad seeing me pass you in the race, but if you know that we are both racing to make our world better, you will feel good knowing that we are racing toward a common goal, a mutual reward. In a competition of love we’ll all share in the victory, no matter who comes first.

20. Since I won’t let the critics seal my fate, they keep hollering I’m full of hate. But they don’t really hurt me none, ’cause I’m doing good and having fun.

21. Float like a butterfly sting like a bee – his hands can’t hit what his eyes can’t see.

#22 The Greatest: My Own Story By Muhammad Ali, Richard Durham

23. What I suffered physically was worth what I’ve accomplished in life. A man who is not courageous enough to take risks will never accomplish anything in life.

24. Service to others is the rent you pay for your room here on earth.