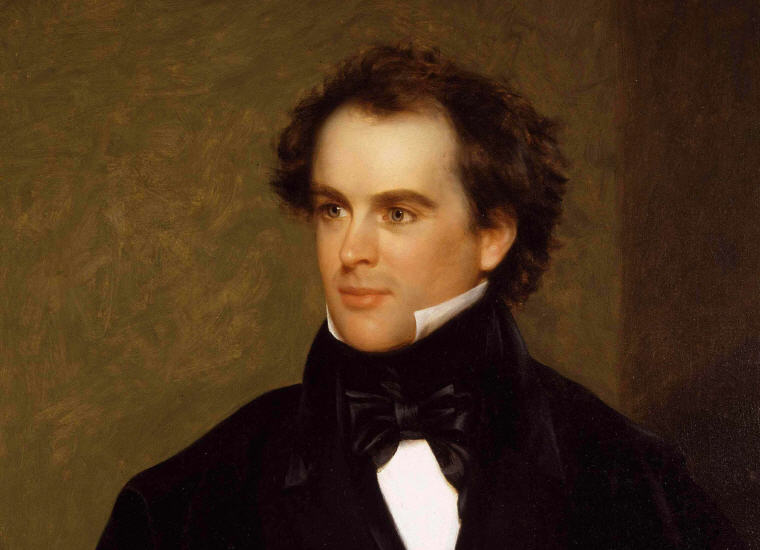 1. Love, whether newly born, or aroused from a death-like slumber, must always create a sunshine, filling the heart so full of radiance, that it overflows upon the outward world.

2. Let men tremble to win the hand of woman, unless they win along with it the utmost passion of her heart!

3. It is to the credit of human nature, that, except where its selfishness is brought into play, it loves more readily than it hates. Hatred, by a gradual and quiet process, will even be transformed to love, unless the change be impeded by a continually new irritation of the original feeling of hostility.

4. They would only have laughed, had anybody told them that human beings owe a debt of love to one another, because there is no other method of paying the debt of love and care which all of us owe to Providence.

Nathaniel Hawthorne (4 July 1804 – 19 May 1864) was a 19th-century American novelist and short story writer, best-known today for his many short stories and his romance novels The Scarlet Letter, The House of the Seven Gables, The Blithedale Romance, and The Marble Faun.
________________

#1 Passages from the American Note-books of Nathaniel Hawthorne, Volume 2, Ticknor and Fields, 1868

1. Happiness in this world, when it comes, comes incidentally. Make it the object of pursuit, and it leads us a wild-goose chase, and is never attained. Follow some other object, and very possibly we may find that we have caught happiness, without dreaming of it…

2. Words, so innocent and powerless as they are, as standing in a dictionary, how potent for good and evil they become, in the hands of one who knows how to combine them.

3. No summer ever came back, and no two summers ever were alike. Times change, and people change; and if our hearts do not change as readily, so much the worse for us. [S]

4. The greatest obstacle to being heroic is the doubt whether one may not be going to prove one’s self a fool; the truest heroism is, to resist the doubt; and the profoundest wisdom, to know when it ought to be resisted, and when to be obeyed. [S]

#5 Passages from the American note-books, Houghton, Osgood, and Company, 1879

5. Every individual has a place to fill in the world, and is important, in some respects, whether he chooses to be so or not. (1836 [S])

#6 Passages from the American note-books, Houghton, Osgood, and Company, 1879

6. But the weather has been generally sunny and pleasant, though often very cold; and I cannot endure to waste anything so precious as autumnal sunshine by staying in the house. (10 October 1942 [S])

7. It is a good lesson–though it may often be a hard one–for a man who has dreamed of literary fame, and of making for himself a rank among the world’s dignitaries by such means, to step aside out of the narrow circle in which his claims are recognised, and to find how utterly devoid of significance, beyond that circle, is all that he achieves, and all he aims at. [S]

8. If his inmost heart could have been laid open, there would have been discovered that dream of undying fame, which, dream as it is, is more powerful than a thousand realities.

#9 The Flower of Eden, The House of the Seven Gables

9. The world owes all its onward impulses to men ill at ease. The happy man inevitably confines himself within ancient limits.
________________

1. All brave men love; for he only is brave who has affections to fight for, whether in the daily battle of life, or in physical contests.

2. Happiness is like a butterfly: the more you chase it, the more it will elude you, but if you turn your attention to other things, it comes and sits softly on your shoulder.