1. Who would have thought that teaching a kid to surf, would teach me that surfing isn’t the most important thing in the world? And that something else is. Love. Bigger than any tidal wave. More powerful than any fear.

2. Love is bigger than any tidal wave or fear. 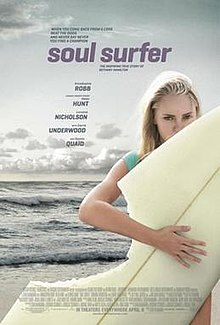 Excerpt from Wikipedia: Soul Surfer is a 2011 American drama film about the life of surfer Bethany Hamilton. At the age of thirteen, Hamilton lost her arm to a shark attack. The film details the events surrounding this attack and her struggle during the aftermath. The film is directed by Sean McNamara, who based the screenplay on Hamilton’s autobiography of the same name and on the filmmakers’ interviews with the family. The title refers to a term coined in the 1960s to denote someone who surfs purely for pleasure, but the word soul has a double meaning as a reference to Hamilton’s Christian faith, which helped her recover her surfing career after the attack. AnnaSophia Robb stars as Hamilton, and Dennis Quaid and Helen Hunt star as Hamilton’s parents.
_____________________________________

1. I don’t know why terrible things happen to us sometimes. But I have to believe that something good is going to come out of this.

2. Don’t be sorry for compassion … it can move us to do amazing things..

3. People are so amazing. There’s an eighth grader from North Carolina, who lost his arm. Logan, and he says he’s gonna try out for his school soccer team because of me.

4. So don’t take just any wave that comes along. The greatest surfers, they all have this sixth sense. They know when the best waves are coming. They can feel it. It’s a gift. You have that gift too.

5. Listen to your instinct. Trust it.

6. What am I supposed to do now? You’re supposed to enjoy it. All of it. For the rest of your life.

7. Hey, Malina. Great job. You’re a tough opponent. Bethany Hamilton, nobody is as tough as you.

8. Bethany, I’m from Transworld Surf Magazine. Are you upset you didn’t win today? I didn’t come to win. I came to surf.

9. I wouldn’t change what happened to me, because then I wouldn’t have this chance in front of all of you. This chance to embrace more people than I ever could have with two arms.

10. I was born to surf. This is why I wake up at the crack of dawn every day. This is why I endure belly rashes, reef cuts, muscles so tired they feel like noodles.

11. And I’ve learned that life is a lot like surfing. When you get caught in the impact zone, you need to get right back up because you never now what’s over the next wave.

12. If you have faith, anything is possible. Anything at all.

14. You didn’t lose everything Bethany, not even close. That shark didn’t kill you, you’re here, you’re alive, you have your family.