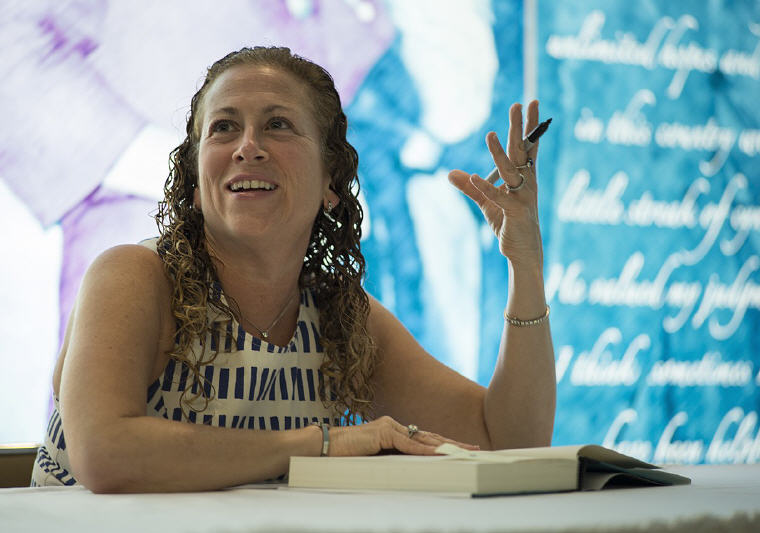 1. You don’t love someone because they’re perfect. You love them in spite of the fact that they’re not.

2. You know it’s never fifty-fifty in a marriage. It’s always seventy-thirty, or sixty-forty. Someone falls in love first. Someone puts someone else up on a pedestal. Someone works very hard to keep things rolling smoothly; someone else sails along for the ride.

3. When you love someone, you say their name different. Like it’s safe inside your mouth.

5. All any of us wanted, really, was to know that we counted. That someone else’s life would not have been as rich without us here.

6. When you loved someone, you put their needs before your own. No matter how inconceivable those needs were; no matter how fucked up; no matter how much it made you feel like you were ripping yourself into pieces.

7. Do you know what it’s like to love someone so much, that you can’t see yourself without picturing her? Or what it’s like to touch someone, and feel like you’ve come home? What we had wasn’t about sex, or about being with someone just to show off what you’ve got, the way it was for other kids our age. We were, well, meant to be together. Some people spend their whole lives looking for that one person. I was lucky enough to have her all along.

8. Love meant jumping off a cliff and trusting that a certain person would be there to catch you at the bottom.

9. I know it seems strange, but when you are attracted to people, it’s because of the details. Their kindness. Their eyes. Their smile. The fact that they can get you to laugh when you need it the most.

11. I close my eyes, thinking that there is nothing like an embrace after an absence, nothing like fitting my face into the curve of his shoulder and filling my lungs with the scent of him.

12. ‘I always wondered why God was supposed to be a father,’ she whispers. ‘Fathers always want you to measure up to something. Mothers are the ones who love you unconditionally, don’t you think?’

13. Love is not an equation, as your father once wanted me to believe. It’s not a contract, and it’s not a happy ending. It is the slate under the chalk and the ground buildings rise from and the oxygen in the air. It is the place I come back to, no matter where I’ve been headed.

14. When you love someone, you want to keep him safe.

Excerpt from Wikipedia: Jodi Lynn Picoult (born May 19, 1966) is an American author. She was awarded the New England Bookseller Award for fiction in 2003. Picoult currently has some 14 million copies of her books in print worldwide.
_________________

1. When you’re different, sometimes you don’t see the millions of people who accept you for what you are. All you notice is the one person who doesn’t.

2. There’s always going to be bad stuff out there. But here’s the amazing thing—light trumps darkness, every time. You stick a candle into the dark, but you can’t stick the dark into the light.

3. A very wise man once told me that you can’t look back—you just have to put the past behind you, and find something better in your future.

4. The damage was permanent; there would always be scars. But even the angriest scars faded over time until it was difficult to see them written on the skin at all, and the only thing that remained was the memory of how painful it had been.

5. Sometimes when you pick up your child you can feel the map of your own bones beneath your hands, or smell the scent of your skin in the nape of his neck. This is the most extraordinary thing about motherhood—finding a piece of yourself separate and apart that all the same you could not live without.

8. You make yourself strong because it’s expected of you. You become confident because someone beside you is unsure. You turn into the person others need you to be.

9. Some lessons can’t be taught, they simply have to be learned.

10. Things had a way of working out for the best when you let them run their course.

11. Heroes didn’t leap tall buildings or stop bullets with an outstretched hand; they didn’t wear boots and capes. They bled, and they bruised, and their superpowers were as simple as listening, or loving. Heroes were ordinary people who knew that even if their own lives were impossibly knotted, they could untangle someone else’s. And maybe that one act could lead someone to rescue you right back.

12. Did you ever walk through a room that’s packed with people, and feel so lonely you can hardly take the next step?

13. I’ve always sort of wondered, though: If everyone else’s opinion is what matters, then do you ever really have one of your own?

14. Everyone thinks you make mistakes when you’re young. But I don’t think we make any fewer when we’re grown up.

15. Q: What do you do when you are stuck or have temporary writer’s block?

I don’t believe in writer’s block. Think about it—when you were blocked in college and had to write a paper, didn’t it always manage to fix itself the night before the paper was due? Writer’s block is having too much time on your hands. If you have a limited amount of time to write, you just sit down and do it. You might not write well every day, but you can always edit a bad page. You can’t edit a blank page.

16. Q: What is the story behind the publication of your first book?

I had over 100 rejection letters from agents. Finally, one woman who had never represented anyone in her life said she thought she could take me on. I jumped at the chance. She sold my first novel in three months.