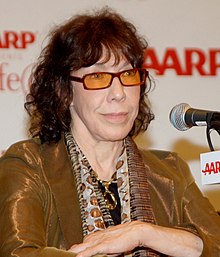 Excerpt from Wikipedia: Mary Jean “Lily” Tomlin (born September 1, 1939) is an American actress, comedienne, writer, and producer. Tomlin has been a major force in American comedy since the late 1960’s when she began a career as a stand up comedian and became a featured performer on television’s Laugh-in. Her career has spanned television, comedy recordings, Broadway, and motion pictures, enjoying acclaimed success in each medium. She has won many awards including Tony Awards, Emmy Awards, and a Grammy Award and has also been nominated for an Academy Award. Tomlin’s humor is often sharp and insightful in the traditions of standup comedians, but also frequently endearing, slightly wacky, and generally quite “family friendly” in the tradition of television comediennes such as Lucille Ball (Tomlin’s idol), Carol Burnett, and Eve Arden.
_____________________________________

1. Don’t be afraid of missing opportunities. Behind every failure is an opportunity somebody wishes they had missed.

2. I always wanted to be somebody, but now I realize I should have been more specific.

3. I always wondered why somebody doesn’t do something about that. Then I realized I was somebody.

4. I like a teacher who gives you something to take home to think about besides homework.

5. I personally think we developed language because of our deep need to complain.

7. The problem with winning the rat race is you’re still a rat.