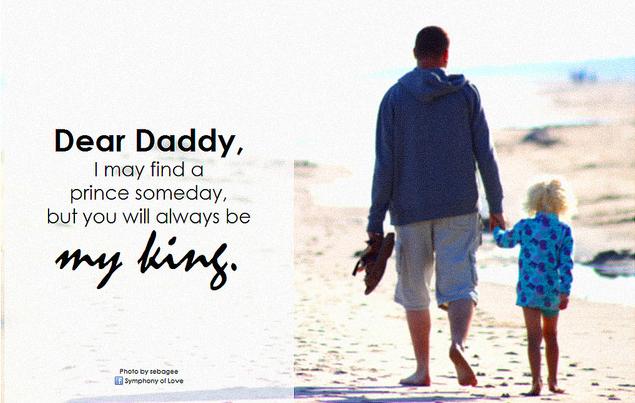 1. My father used to play with my brother and me in the yard. Mother would come out and say, “You’re tearing up the grass.” “We’re not raising grass,” Dad would reply. “We’re raising boys.”

The father is always a Republican toward his son, and his mother’s always a Democrat.

5. Love and fear. Everything the father of a family says must inspire one or the other.

6. I cannot think of any need in childhood as strong as the need for a father’s protection.

7. A father is always making his baby into a little woman. And when she is a woman he turns her back again.

8. To be a successful father… there’s one absolute rule: when you have a kid, don’t look at it for the first two years.

9. It is much easier to become a father than to be one.

10. Fatherhood is pretending the present you love most is soap-on-a-rope.

Nothing I’ve ever done has given me more joys and rewards than being a father to my children.

A new father quickly learns that his child invariably comes to the bathroom at precisely the times when he’s in there, as if he needed company. The only way for this father to be certain of bathroom privacy is to shave at the gas station.

12. My father always used to say that when you die, if you’ve got five real friends, then you’ve had a great life.

13. This is a moment that I deeply wish my parents could have lived to share. My father would have enjoyed what you have so generously said of me-and my mother would have believed it.

14. If a country is to be corruption free and become a nation of beautiful minds, I strongly feel there are three key societal members who can make a difference. They are the father, the mother and the teacher.

15. I’m a father. It isn’t just my life any more. I don’t want my kid finding bottles in the house or seeing his father completely smashed.

16. My father gave me the greatest gift anyone could give another person, he believed in me.

18. It no longer bothers me that I may be constantly searching for father figures; by this time, I have found several and dearly enjoyed knowing them all.

19. I was born an only child in Vienna, Austria. My father found hours to sit by me by the library fire and tell fairy stories.

20. I have never been a material girl. My father always told me never to love anything that cannot love you back.

21. It was my father who taught me to value myself. He told me that I was uncommonly beautiful and that I was the most precious thing in his life.

22. It was times like these when I thought my father, who hated guns and had never been to any wars, was the bravest man who ever lived.

23. Becoming a father, I think it inevitably changes your perspective of life. I don’t get nearly enough sleep. And the simplest things in life are completely satisfying. I find you don’t have to do as much, like you don’t go on as many outings.

24. I’m very inspired by him-it was my father who taught us that an immigrant must work twice as hard as anybody else, that he must never give up.

25. My father taught me that the only way you can make good at anything is to practice, and then practice some more.

26. I’ve had a hard life, but my hardships are nothing against the hardships that my father went through in order to get me to where I started.

27. We never know the love of our parents for us till we have become parents.

28. Becoming a father is easy enough, but being one can be very rough.

29. My dad always used to tell me that if they challenge you to an after-school fight, tell them you won’t wait-you can kick their ass right now.

31. Manual labor to my father was not only good and decent for it’s own sake but, as he was given to saying, it straightened out one’s thoughts.

33. My father was always getting excited about something. It’s genetically inside me somewhere.

34. The father who does not teach his son his duties is equally guilty with the son who neglects them.

35. By the time a man realizes that maybe his father was right, he usually has a son who thinks he’s wrong.

36. Spread the diaper in the position of the diamond with you at bat. Then fold second base down to home and set the baby on the pitcher’s mound. Put first base and third together, bring up home plate and pin the three together. Of course, in case of rain, you gotta call the game and start all over again.

37. There are no adequate substitutes for father, mother, and children bound together in a loving commitment to nurture and protect. No government, no matter how well-intentioned, can take the place of the family in the scheme of things.

38. Sometimes the poorest man leaves his children the richest inheritance.

39. My father was a man of love. He always loved me to death. He worked hard in the fields, but my father never hit me. Never. I don’t ever remember a really cross, unkind word from my father.

40. When I was a boy of fourteen, my father was so ignorant I could hardly stand to have the old man around. But when I got to be twenty-one, I was astonished at how much he had learned in seven years.

41. If the relationship of father to son could really be reduced to biology, the whole earth would blaze with the glory of fathers and sons.

42. You will find that if you really try to be a father, your child will meet you halfway.

43. A father is a daughter’s first love and a son’s first hero.

44. I believe that what we become depends on what our fathers teach us at odd moments, when they aren’t trying to teach us. We are formed by little scraps of wisdom.

45. I always wondered why God was supposed to be a father,” she whispers. Fathers always want you to measure up to something. Mothers are the ones who love you unconditionally, don’t you think?

46. Being a role model is the most powerful form of educating…too often fathers neglect it because they get so caught up in making a living they forget to make a life.